Outside At the Cabin 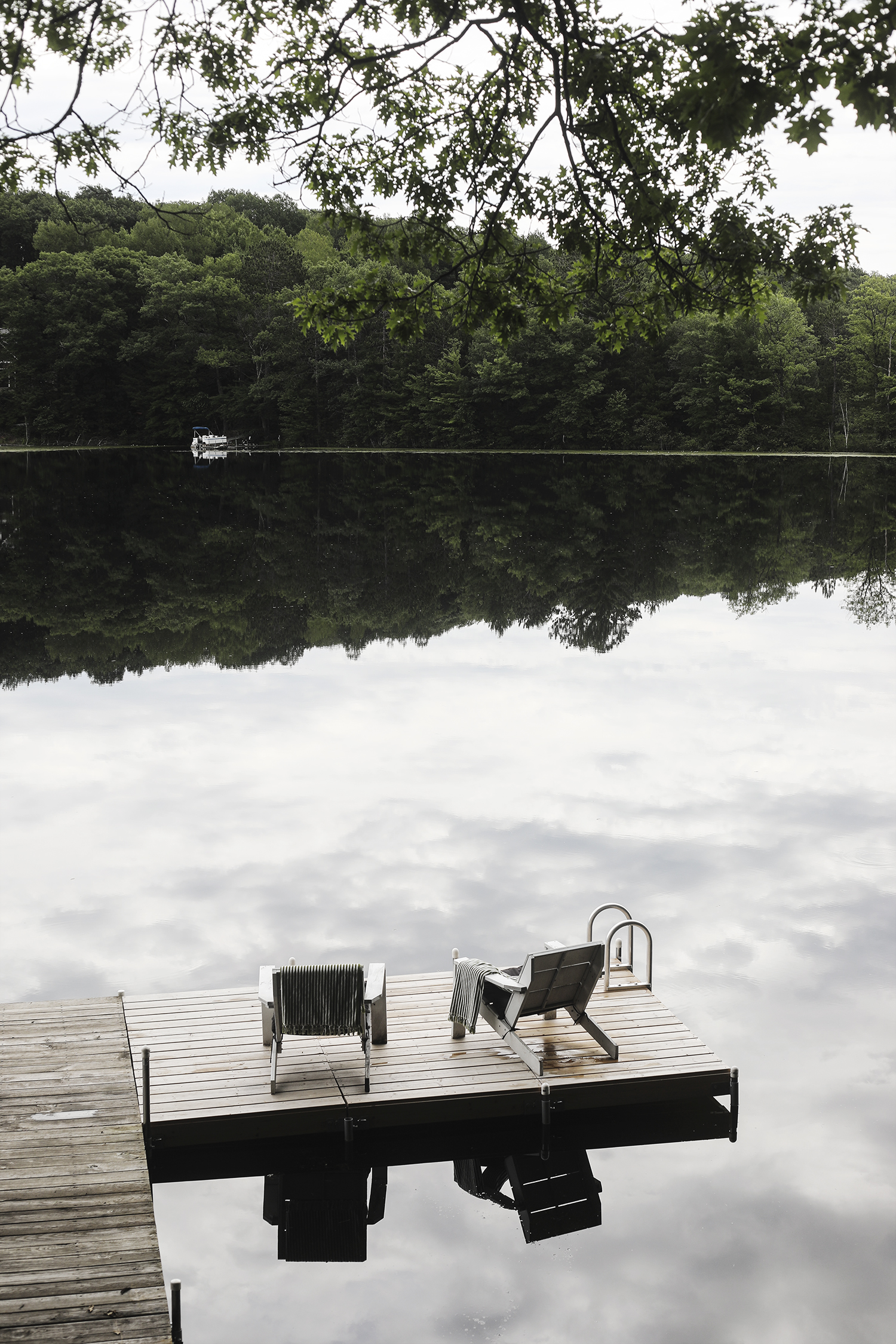 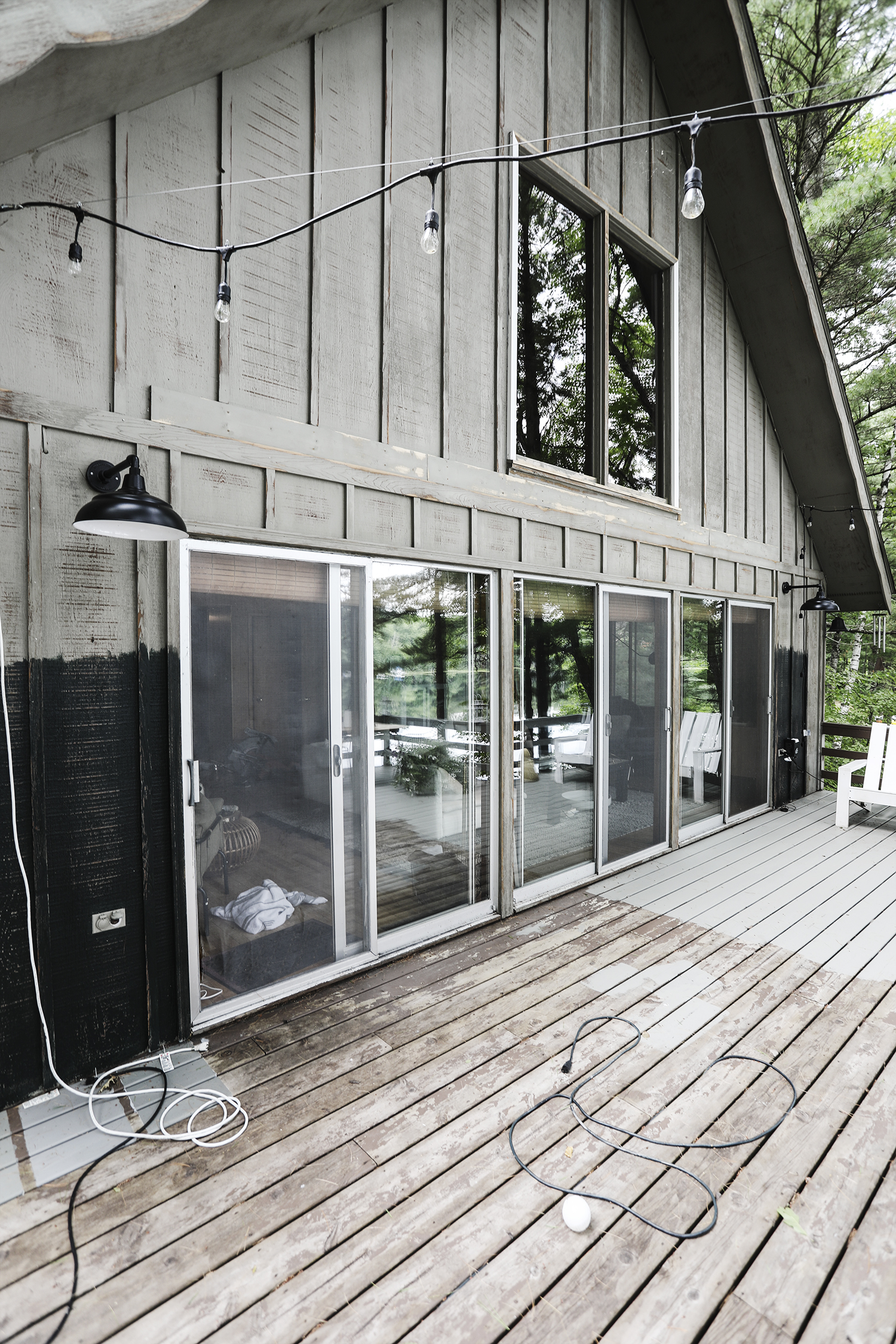 I’ve been working on a lot of little things this summer, each of them taking up a day here and there, sometimes it’s hard to tell if I’m really making progress at all. I was really hoping by now that I’d be able to share photos of the new exterior paint on the cabin. It’s been a bummer that it hasn’t gotten done yet. I had high hopes that I would get time to enjoy the cabin’s new look the majority of the summer. The painter we hired has been a bad communicator so we have no real idea as to how long it will be before the job is complete. To be fair, it’s not entirely our painter’s fault, the weather is mostly to blame, but the lack of ability to answer an e-mail or phone call doesn’t help either. All I know is that it has been very wet and now it’s pretty dry and still no paint. 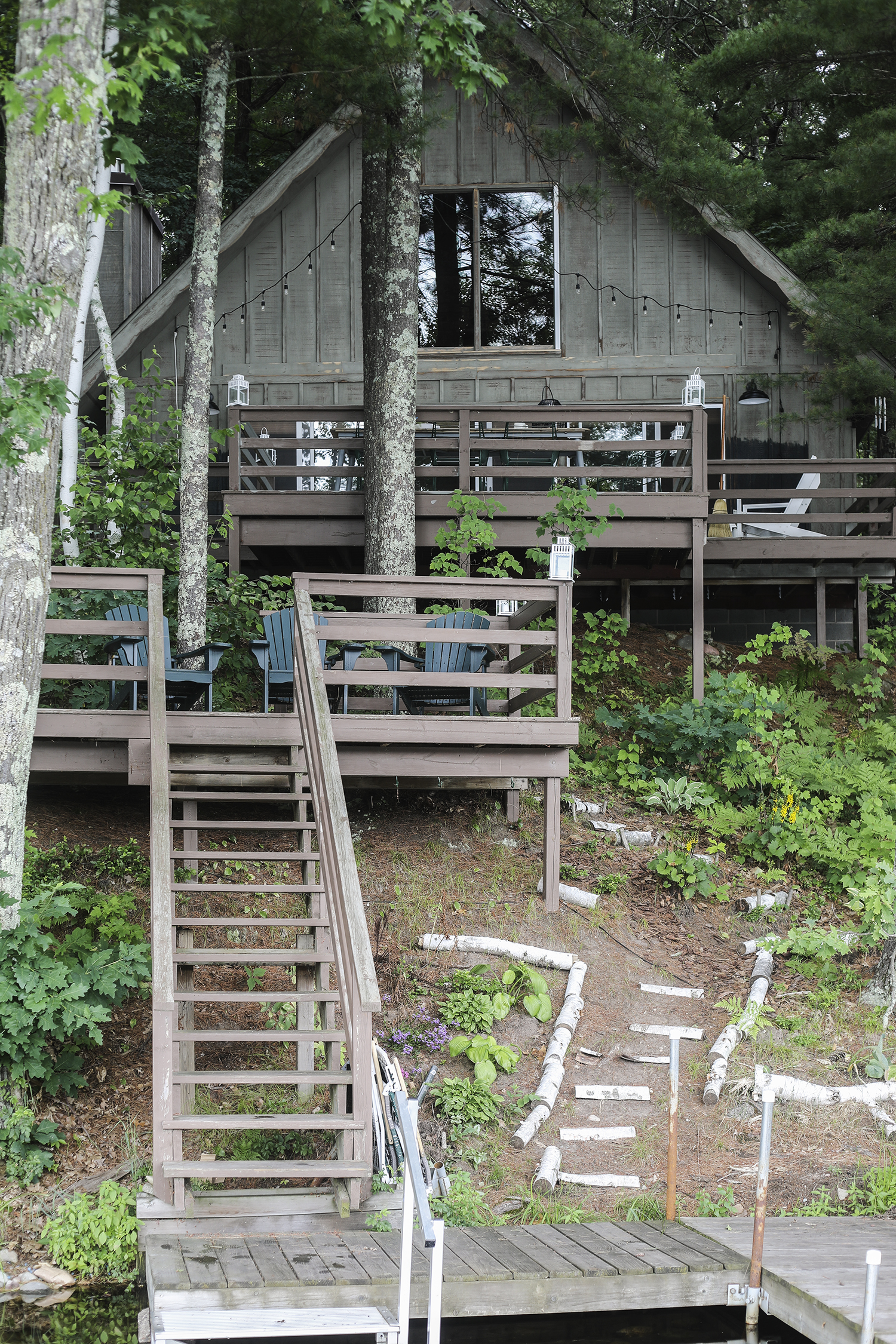 The painter did show up once a few weeks back to sand and clean the cabin, so now we’ve gotten a chance to enjoy that faux-country-shabby look. I know you want to pin those images.

Please notice the new exterior barn lights I added to the outside of the cabin. I really love them. I purchased the parts here, you can customize the look by choosing any neck style and pairing with a shade of your choice. 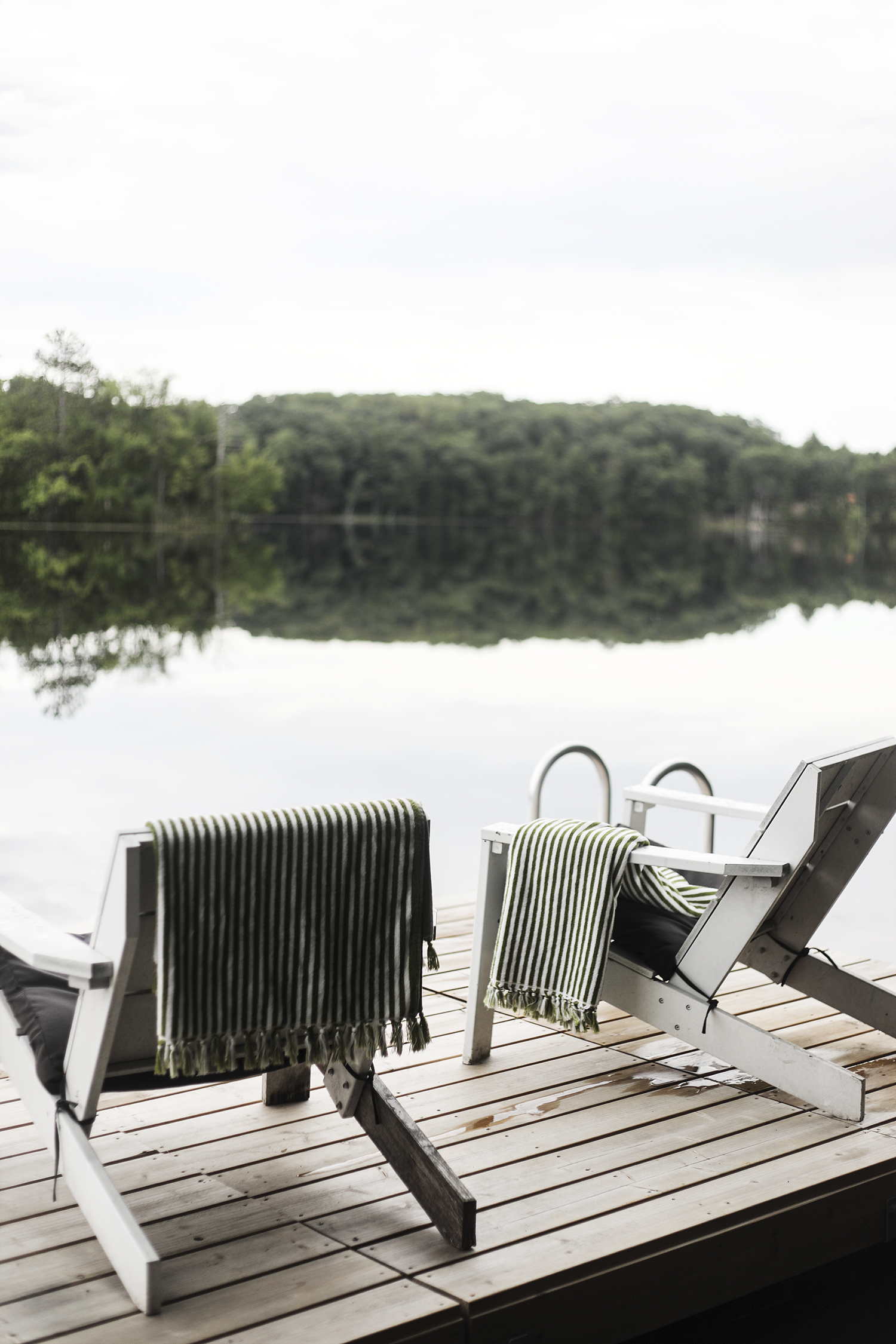 On a more positive note, this spring we ordered a bunch of new dock parts! I don’t stop at interiors when it comes to making the most of a space, and I was determined to reconfigure the dock so that we could make it into what I am labeling “the dock deck”. The idea was to move the dock over to the left of the stairs. Moving the dock over 8 feet would allow for a larger swimming area for the younger swimmers, and would give us enough room on the end of the dock to extend a large deck over the water. The larger dock creates enough space for a few chairs and the teens (and maybe even me) love launching themselves off the end of the dock and climbing up the new ladder. It’s nearly 7-8 feet deep past the end of the dock, so it’s the perfect spot for cannon balls (or accidental belly flops if yer me).

Over the course of a few spring weekends, we completed our first project as a married couple (16 years deep), Jeff even learned how to use the drill, which he referred to as “the screwer”.

Jeff even learned how to use the drill, which he referred to as “the screwer” 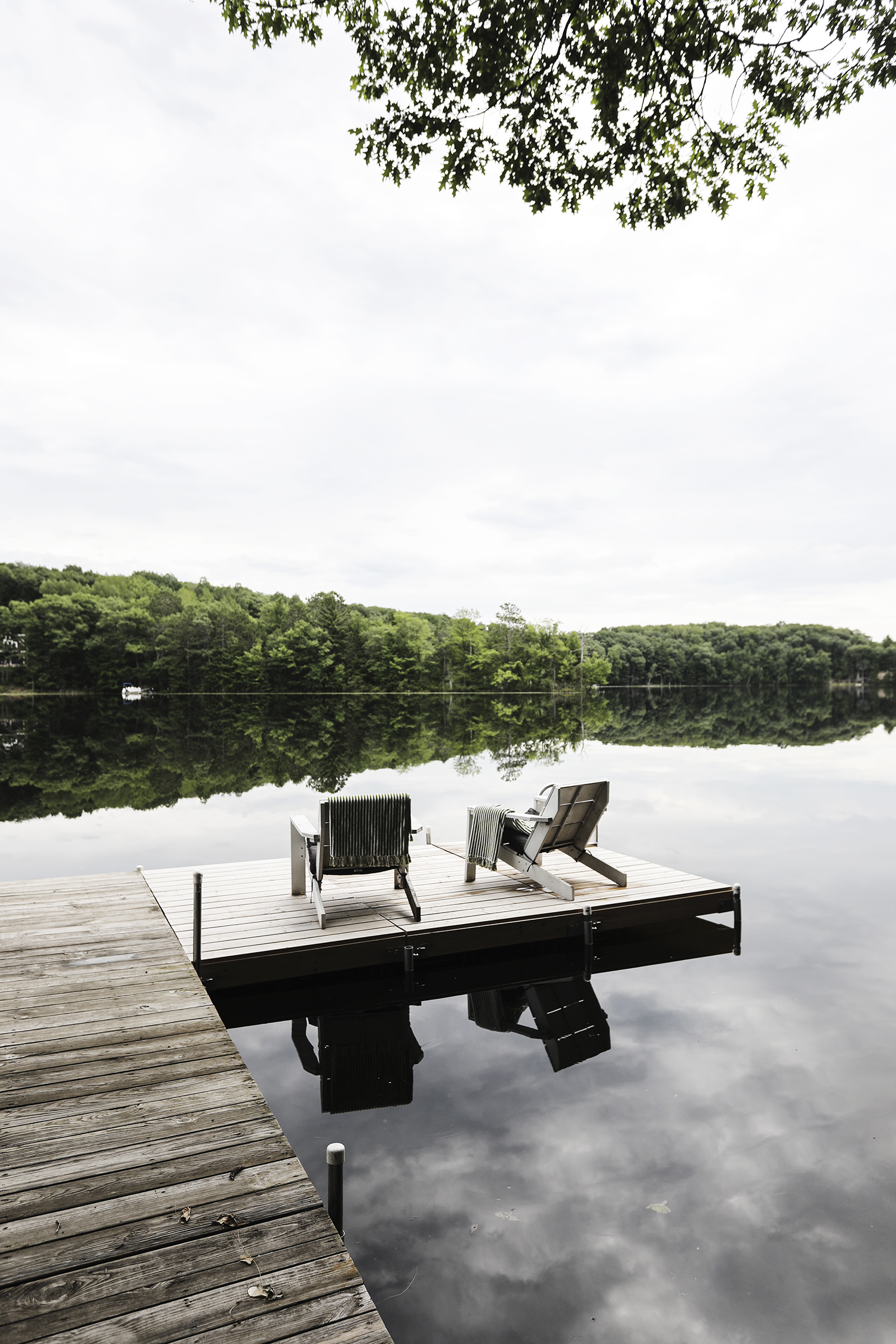 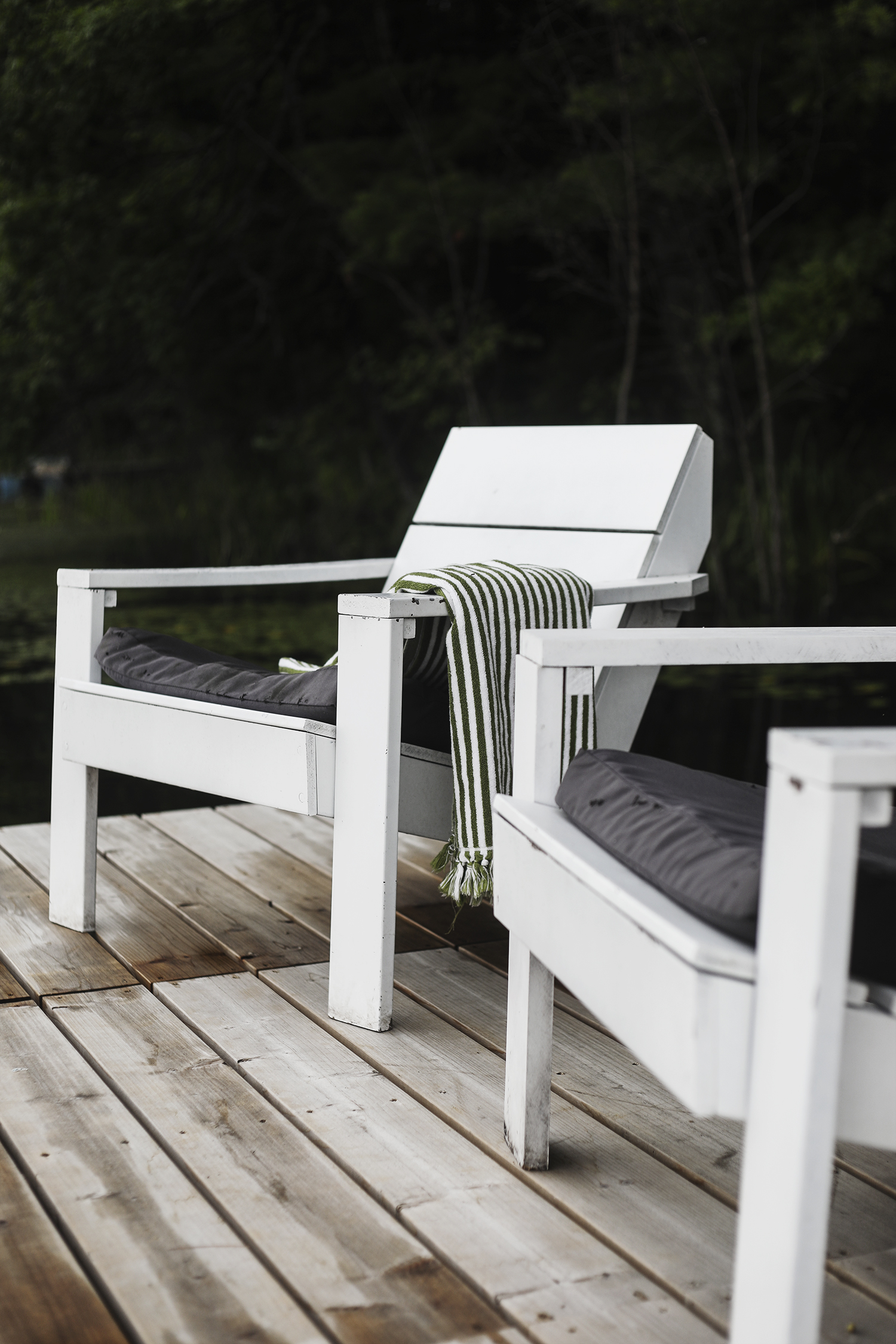 You should have seen us! Real city slickers with waders. We were up to our nipples in a freezing cold May lake trying to put our dock-deck together. We managed to get it after a few failed attempts and a handful of weekends. We are both very proud of our work as country folks! We finally feel like we’re starting to fit the part. Anywho, the dock-deck has been such a great addition to outdoor life at the cabin. 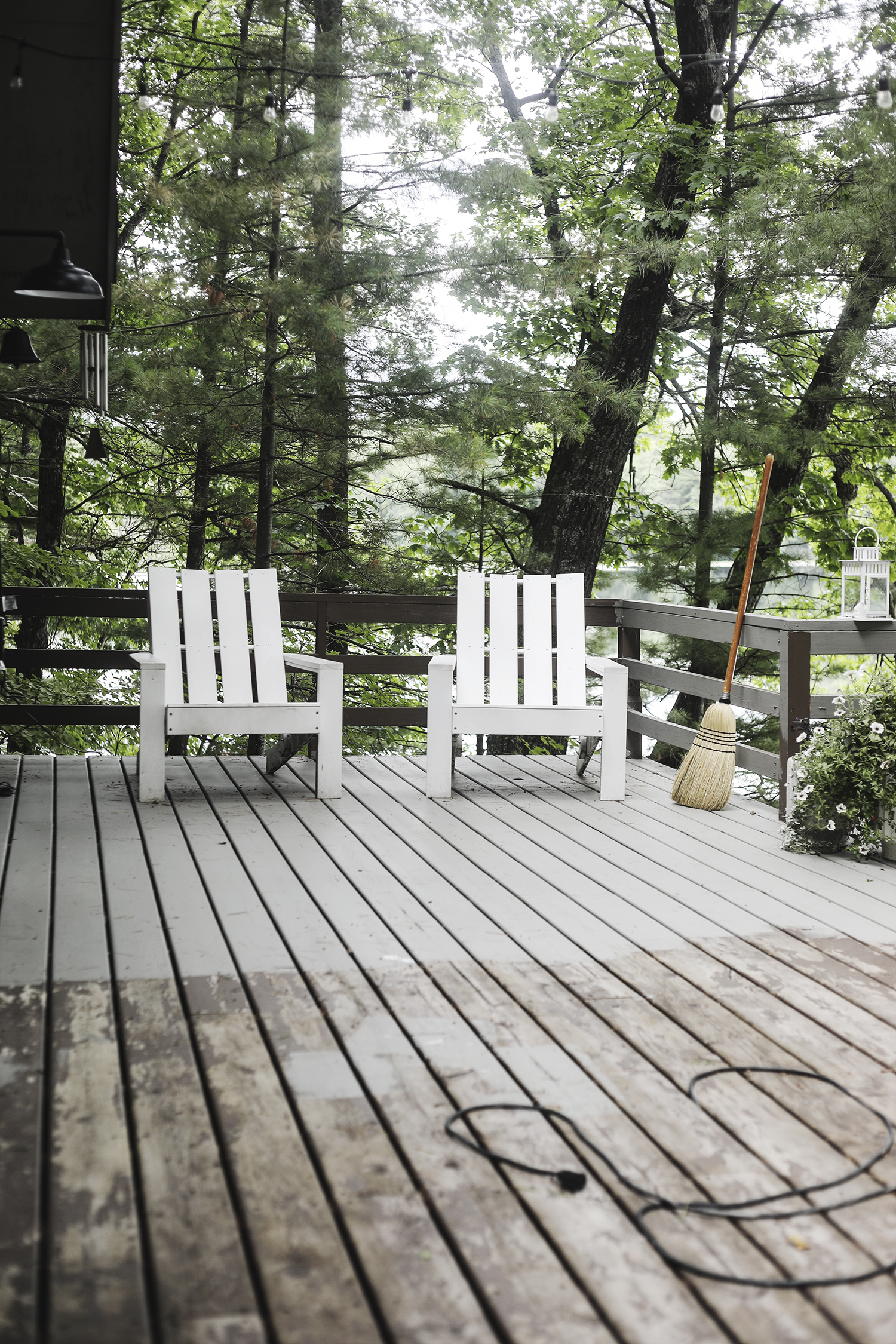 I’ve also started the painstaking process of staining the entire two levels of deck and all of the stairs. The last stain job (which I had nothing to do with) on the deck was not holding up, so I’ve been working at re-staining the deck in small sections. I’ve never done this before, and I’m hoping that I’m setting myself up for success. I power-washed the deck this spring, and have followed up with a stain stripper, and light sanding before I begin applying the solid stain.

The new stain on the deck is looking real fresh and I’m excited to see it with the new paint color. 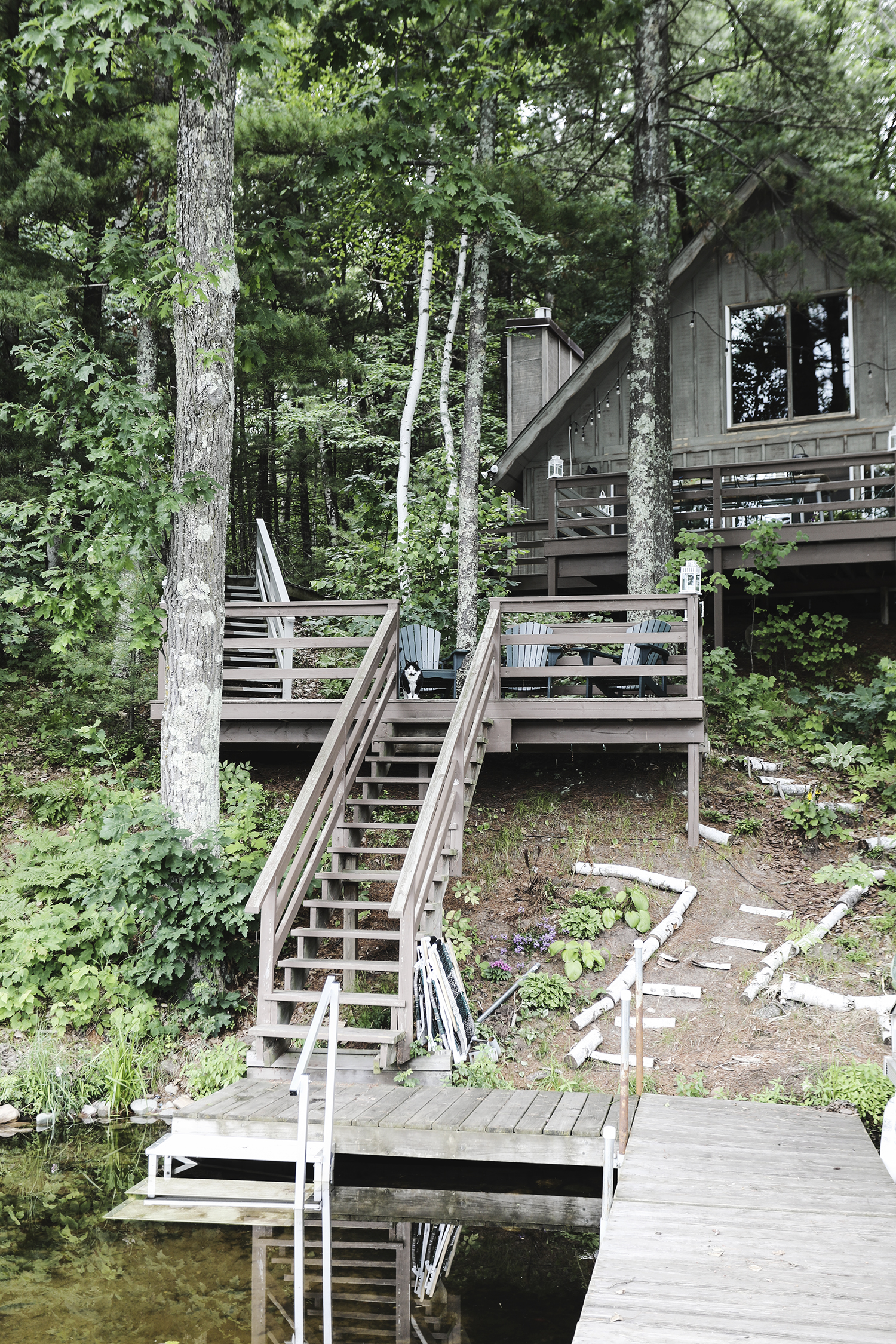 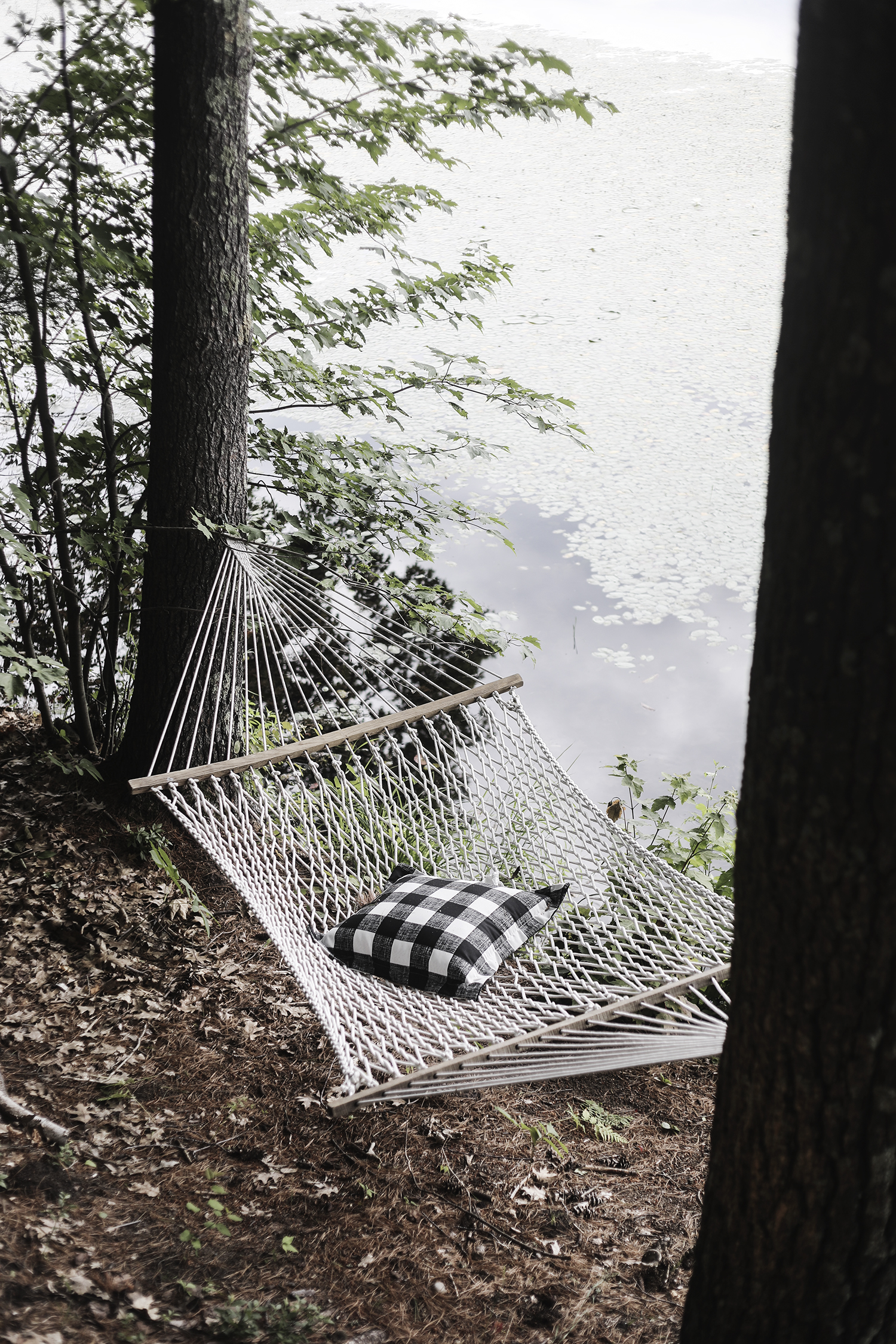 On a weird mom note, I created a nature trail for the kids. I kinda felt like a real hippy out in the woods with my birch logs, making trails and gardens. The teens love running up and down the steep part of the hill. I didn’t want them to slip (or I should say, slip less than they were) so I laid out some logs as temporary steps and garden borders. The gardens and plants are meant to help with erosion since the hill is pretty steep. Although the teens are nearly teens, they still cry when they fall down and I was sick of hearing it, the new birch treads have lessened the crying. One of the trails leads the lower level deck, and the other leads to a hammock I set up for the youth by the water. I force them to go down and read books every once in awhile. I’m the worst. 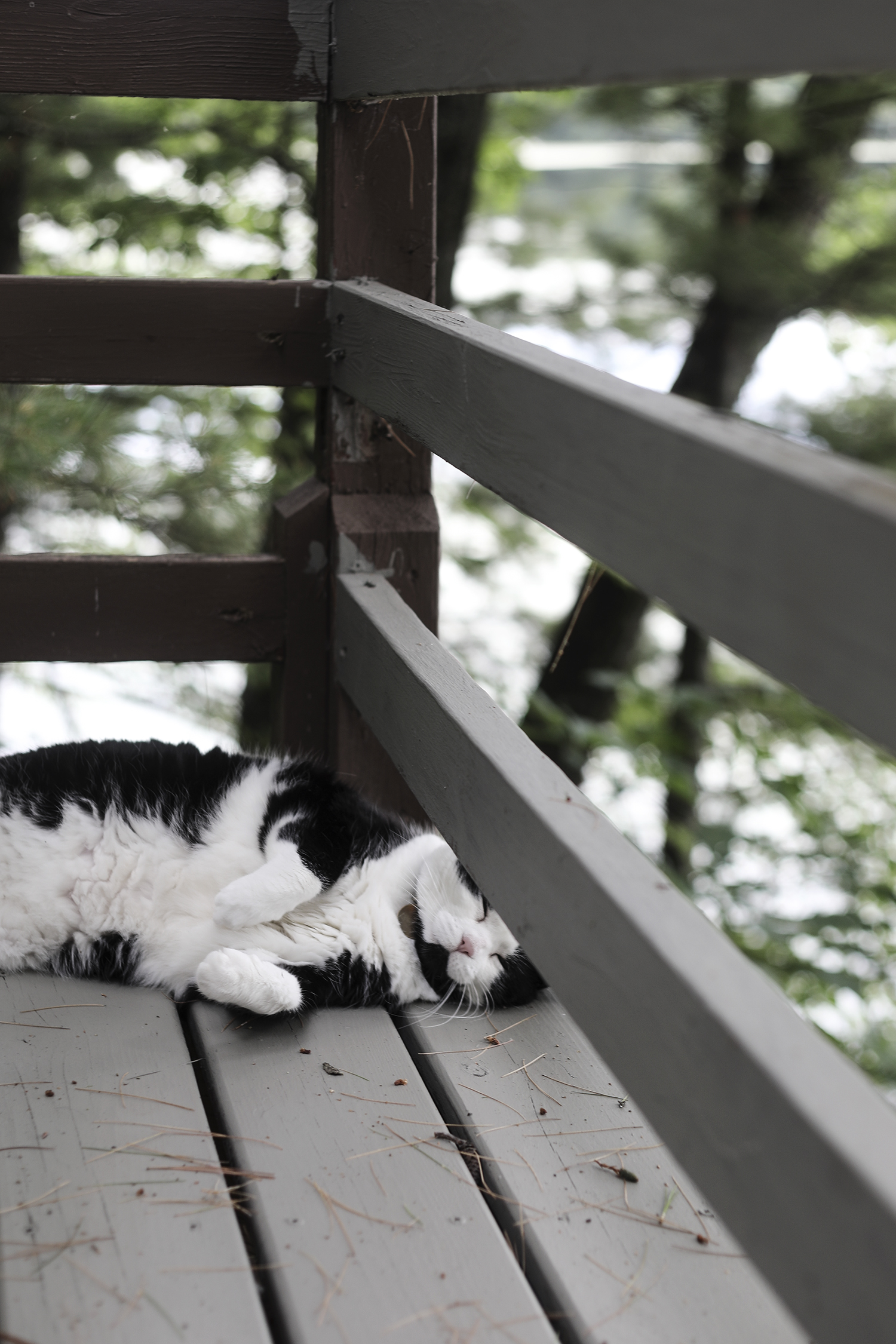 Our old grandma cat, Nami has retired to the cabin this summer. She is getting so old, and doesn’t move much. We didn’t feel like putting her through the card ride, so we just have left her at the cabin. We’re never gone more than a few days and the old girl is happy been enjoying the R&R. 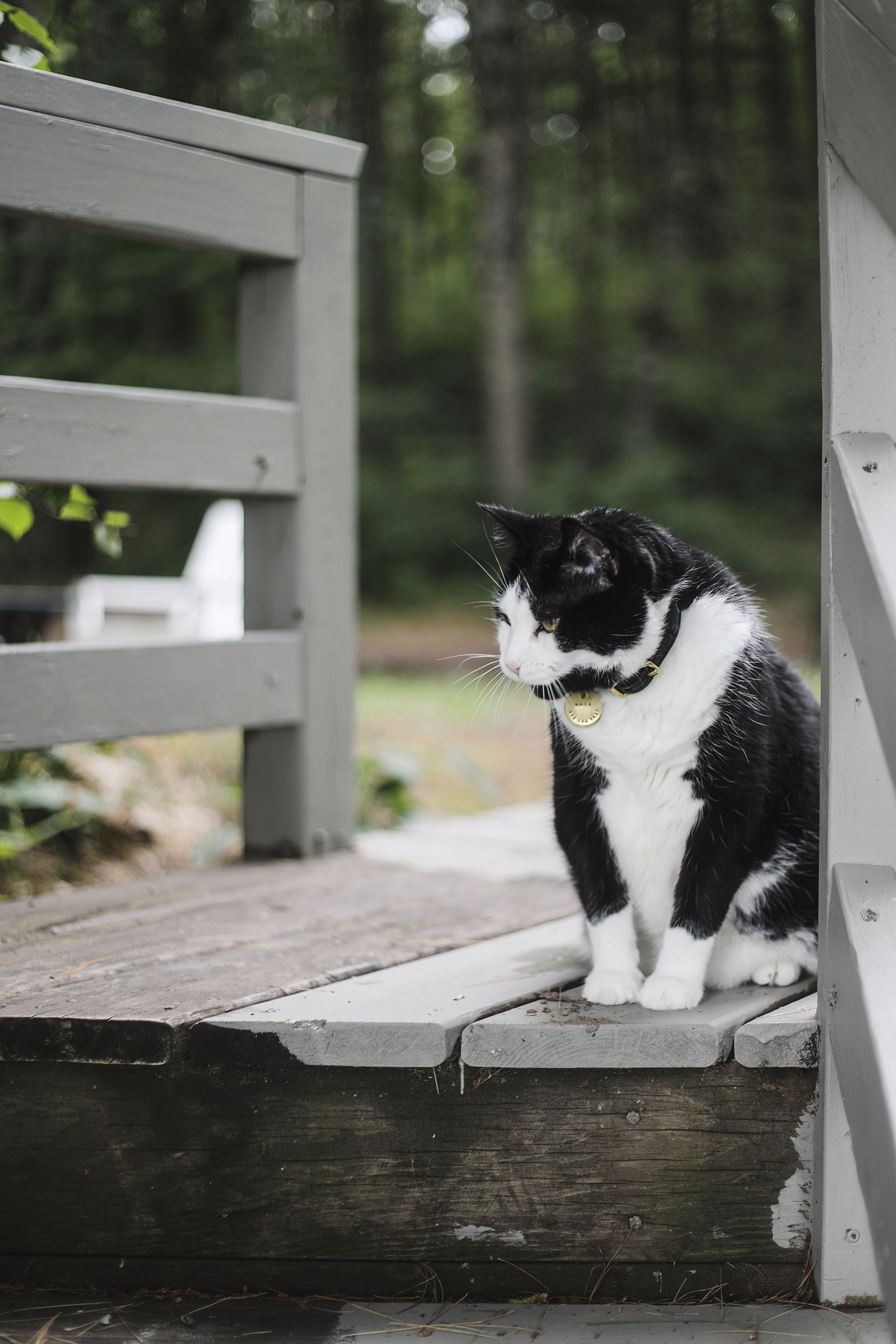 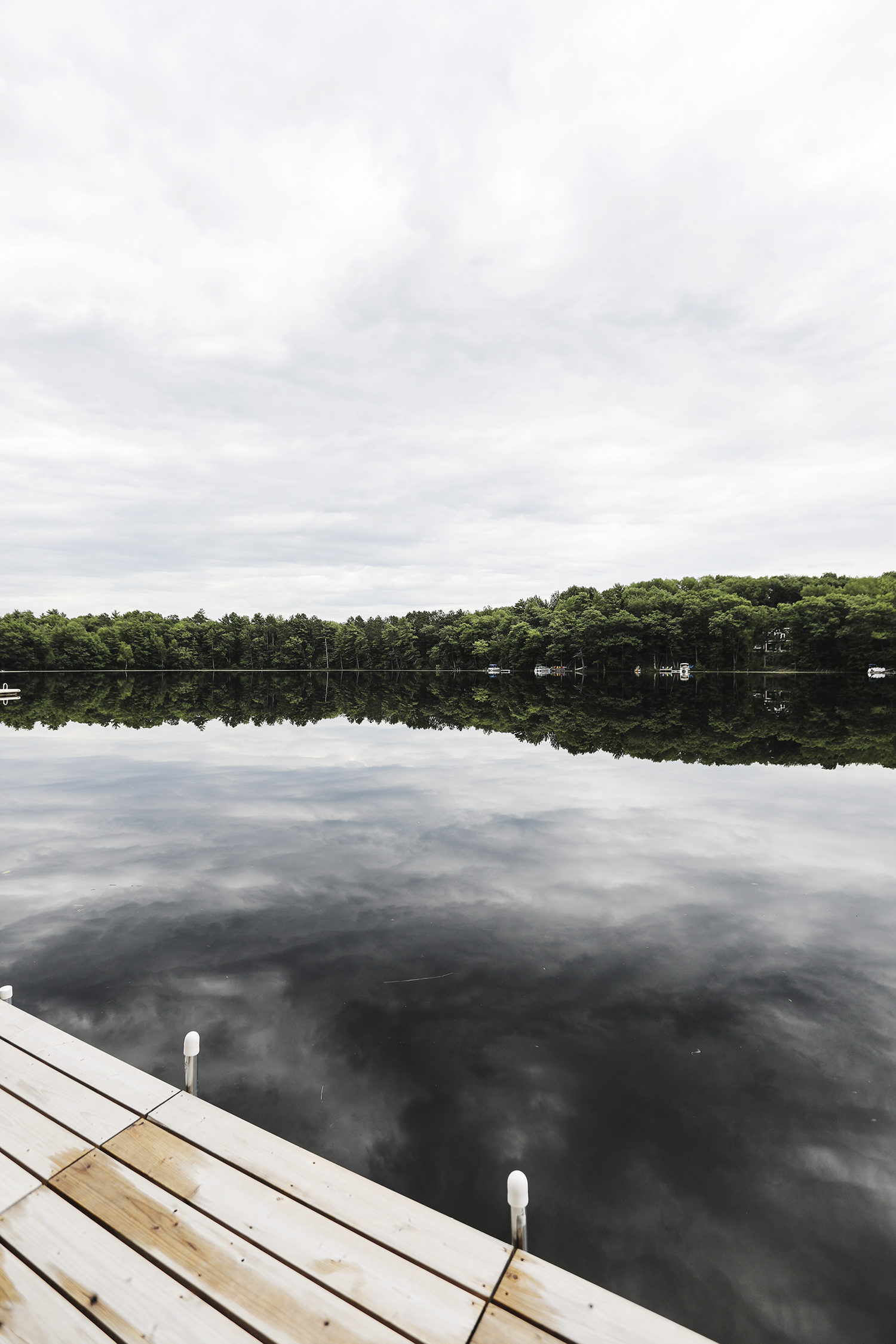 Let’s hope the next update comes sooner. I’ve completed demo in the main-floor cabin bathroom and working on stage one. I suppose it would be helpful if I included a post about that soon. Who decided to make summer so busy anyways?