Hey-O Guys! You won’t even believe when I originally started working on this post! It has been nearly 3 months! It’s been weighing on me too, I often sit down to work on this post, and I just don’t feel right about it so I put it away. The problem with the post was not having to write it, but the actual design process. If you take anything from this, please let it be that slow design is good, and you don’t have to always have all the answers (even though having all the answers usually rules).

I’ve had that lighting strike moment before, when you’ve been just waiting for a solution to a problem and then wham-o(!) you figure that shit out! I know by know that if I think about something long enough I will find the solution. I kept waiting for that moment with this space, and it just wasn’t coming. I was worried that I’d make the wrong decision and would always be doubting what I had done.

Let me start back three months ago. We have this eye sore in our house called the stairwell and upstairs hallway. Think mangled baseboard, popcorn ceiling, plumbing access panels, broken light fixture. Pretty offensive. This space has been left untouched because design-wise it is has the most obstacles to overcome and legitimately requires the most thoughtful design of any space in the house. The two spaces (stairwell and hallway) have walls that intersect in a corner, and the staircase is visible all the way to the main entry. Designing this space involves incorporating the aesthetic of the entry (which I finally figured out and love), the stairwell which is super unattractive, and the upstairs hallway which leads to all three bedrooms and the bathroom. Talk about pressure.

The biggest problem was where to begin and end the painted walls. For instance if I were to paint the upstairs hallway one color, that color would have to either continue all the way down the stairs or stop abruptly in a corner – which could have been kind of okay if I had to, but I was desperate for a better solution. If I wanted to paint the ceiling, that color would have to continue on the staircase ceiling because THEY ARE THE SAME CEILING! Lastly, if the stairwell was painted, where would it stop? The stairwell intersects with walls from the entry way and even more problematic, can be partially visible from the entry. UGHHHHHH!

You can start to see why this had taken me three months to figure out. The biggest thing was not wanting to touch the entry, because its perfect as it is. It had taken be six years to finally figure out how to make that space visually work with the rest of the house, and I wasn’t wanting to mess with that.

Just today, I finally started throwing paint up on some of the walls, just to test colors and hopefully get the ball rolling. (Insert lighting strike and thunder) It finally occurred to me. I could take a hint from the entry way where I only painted black starting at the baseboard and going 1/3 of the way up. I could use that color blocking principle in the stairwell to define the space. The paint line would occur right at the entry way ceiling level, and then continue up into the hallway. Then the stairwell would reference the entry way, and together it would all make sense! You guys, this will be one cohesive space. Oh my god. I am so relieved!

To commit myself to the project I bought this huge af brass mirror back in December. Besides being fucking awesome, it will bounce light around this dark space, plus I think the scale of it in the hallway will surely rule.

Brass Railing
Our upper staircase has a beautiful brass railing, however the railing gets lost next to the current paint color and doesn’t stand out. It has the potensh to be a really cool feature in our house.

Wood Trim Details
The woodwork on the stairs and railing is beautiful, we’re lucky to have such a pretty staircase and entryway. I think there’s a way to show off the dark stained stairs with a dramatic paint color. If I’ve learned anything about this tone of wood is that it loves to be paired with dark wall colors.

Tall Ceilings
There are huge 20′ ceilings in the stairwell, normally this would seem grand as shit, but without a proper light fixture and an endless field of off-white paint that shows every bit of texture on the wall, it looks sloppy. I feel like the stairwell is a missed opportunity (but not fer long).

Narrow Hallway
The upstairs hallway is less than 36″ wide which I’m sure is not up to code at all. Besides safety, this narrow hallway leaves no opportunity for any shelving or a gallery wall. Because kids are basically oafs and have no control of their bodies, frames would be getting constantly knocked into every time a boy decided to use the bathroom. Can you even imagine if I were to hang shelves?

White Popcorn Ceilings
Just NO, either scrape ’em down, or disguise them with dark paint or both. The easiest fix would be to paint them a dark color to minimize the shadow contrast made by the popcorn. The downside to painting this would be that the paint makes the popcorn even more difficult the remove at a future later date (most likely in the way future). The upside to leaving the popcorn ceiling is not having to scrape a ceiling 20′ in the air while hanging over a staircase.

Two Plumbing Access Panels
Do you have plumbing access panels in your old house? How do people of the modern era deal with this? I don’t feel like I ever see these sorts of things in more modern homes. On the hallway wall, we have a 2′ x 3′ panel on the opposite side of the bathtub in the middle of the hallway. It’s SO ugly, you guys! The worst part is that there was baseboard removed to make space for this ridic amount of rarely used access. There is also a 12″ x 18″ panel in the middle of the stairwell to service the toilet. I’d rather someone just break a hole in the wall any time it needed to be accessed, I mean, c’mon!

Continuous Paint Color
THIS IS THE BIGGEST PROBLEM! The paint color in our entry way leads continuously up the stairwell and into the upstairs hallway. A few summers back I came up with a solution to paint the bottom 1/3 of the walls in the entry way black. This added much needed contrast without having to repaint the entire stairwell and hallway. Not only that it gave me some time to dwell on (aka avoid at all costs) what the hell I was going to do to this space.

Missing Light Fixtures
This isn’t too hard to remedy. The light fixture in the hallway needs to be replaced and it would do the stairwell a great service to call an electrician and add a box and switch so that we can illuminate our dark stairs. More than anything it would all be an excuse to add lots of brass to everything and help accentuate that beautiful railing.

I’m still trying to decide between the same black I use in the entry and dining room, or going with a dark blue like Hague Blue from Farrow & Ball. I still haven’t decided, but if you feel like weighing in, please go right ahead. I’m also debating between painting the trim for a tone-on-tone look in the upstairs hallway or sticking with white. I love the look of the tone-on-tone but am worried that it will be too dark for a hallway. What do you think? 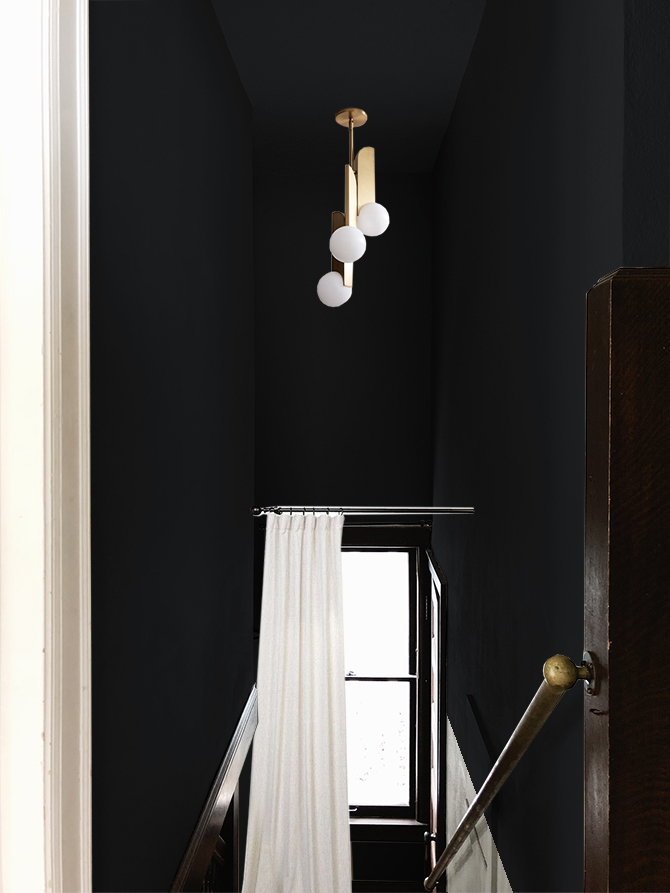 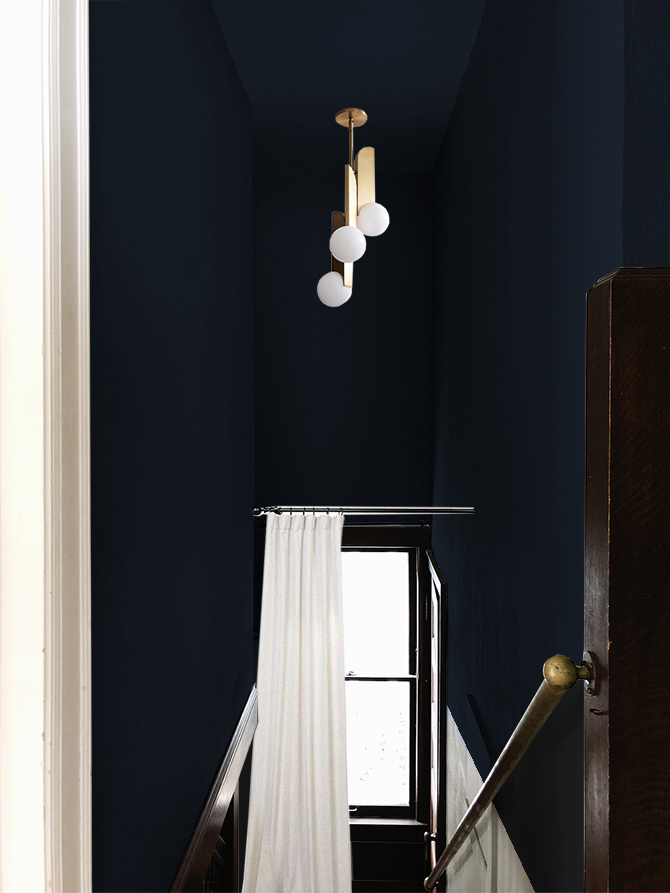 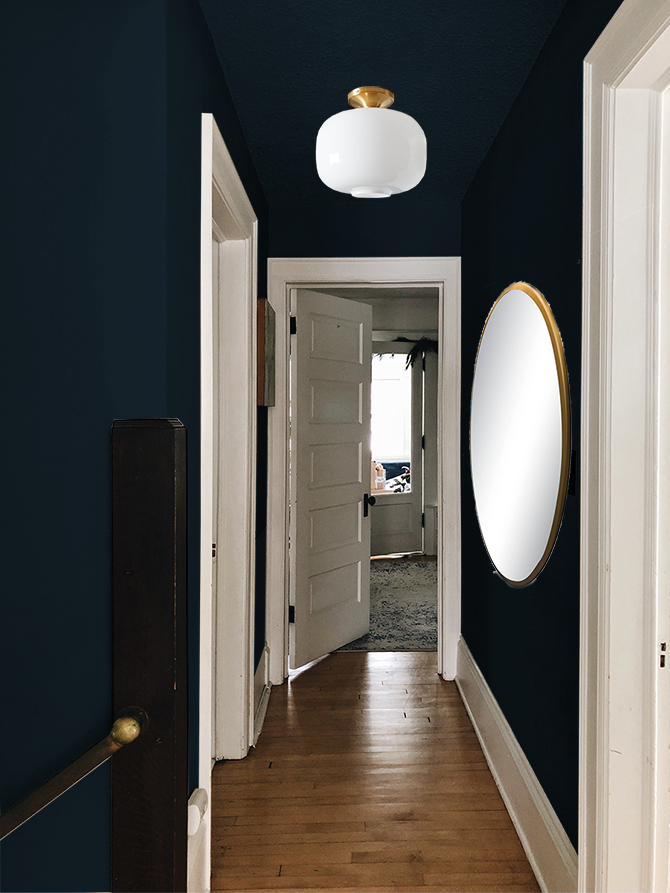 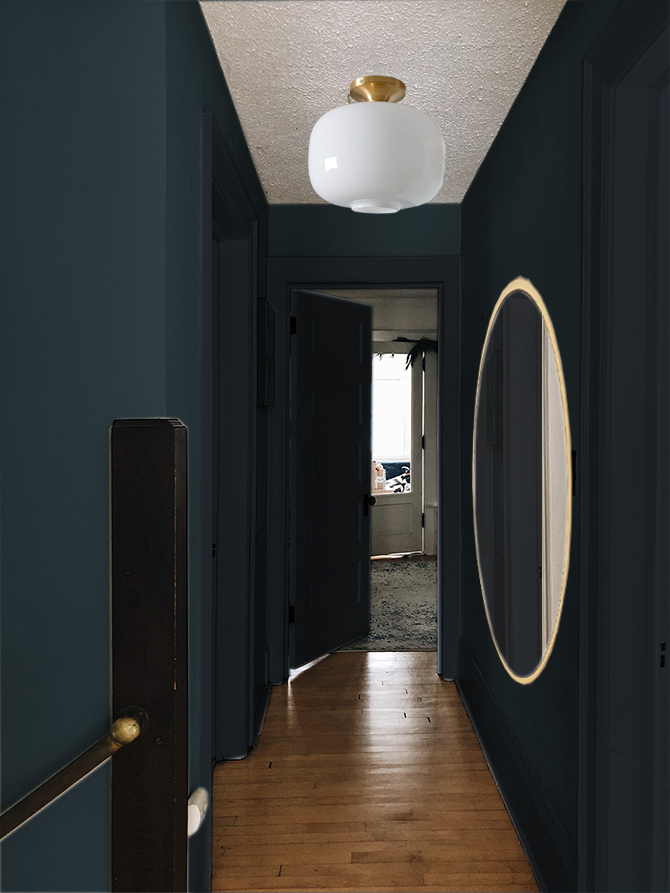 Having this project figure out means that I can go ahead and start refinishing the four (OMG, 4!) doors that lead to the hallway. Super stoked to share that process with yas.

Share this...
38 comments
in Around the House, Entry Way