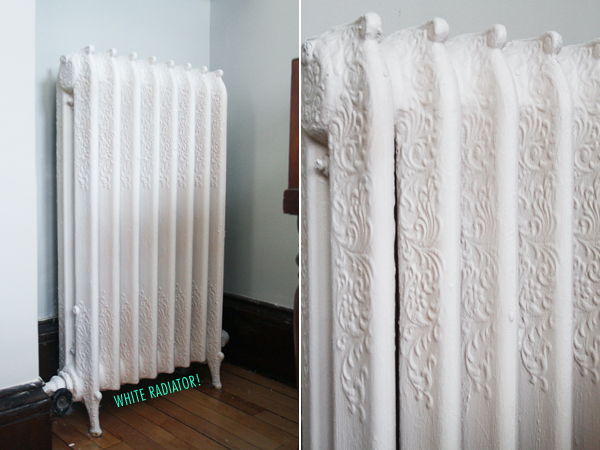 Guys, I finally did it! After weeks of procrastinating I finally set time aside to paint the music room radiator white. I knew this wasn’t going to take me long, but it was just one of this projects that I didn’t want to do, for fear that something would go wrong and it would take me all day and the loss of my mind to fix. Lucky for me that did not happen. Within one hour of starting this project I had a white and shiny almost new radiator! Don’t be scared 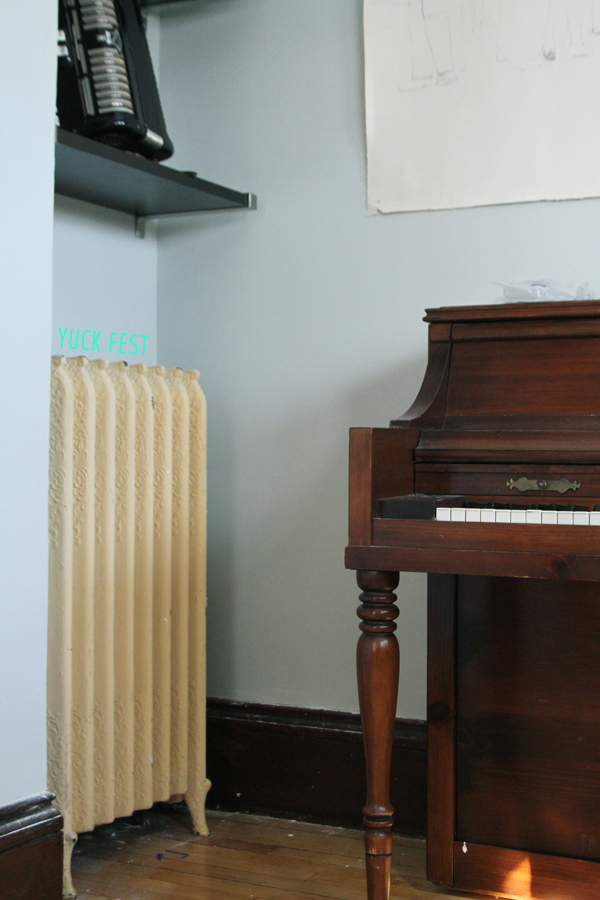 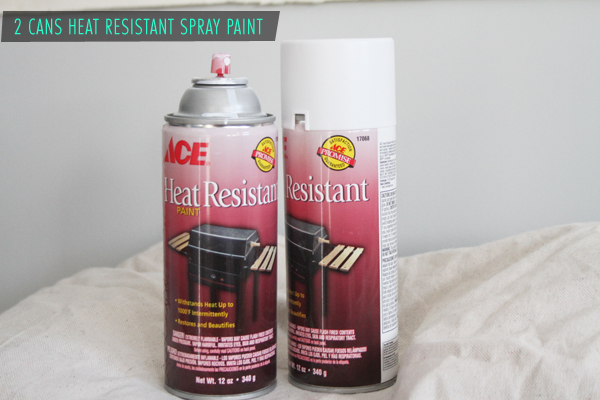 If you follow me on Facebook you know I had some trepidations about getting into this project. It all just seemed a lot harder than it actually was. I thought that it involved lots of preparation, sanding, scraping and special paint. It was scary.

To start, I (by I, I mean Jeff) purchased a few cans of heat resistant spray paint. I’m not sure this kind of spray paint is even necessary. From what I read on the internet, a radiator shouldn’t get hot enough to effect the paint and typically one should be able to use any type of spray paint they like. This heat resistant style of paint would normally be used for some real hot situations like repainting the inside of your fireplace. Like I said, I was a totally chicken and scared, I wanted to be safe, so I bought the stuff and used it anyhow. 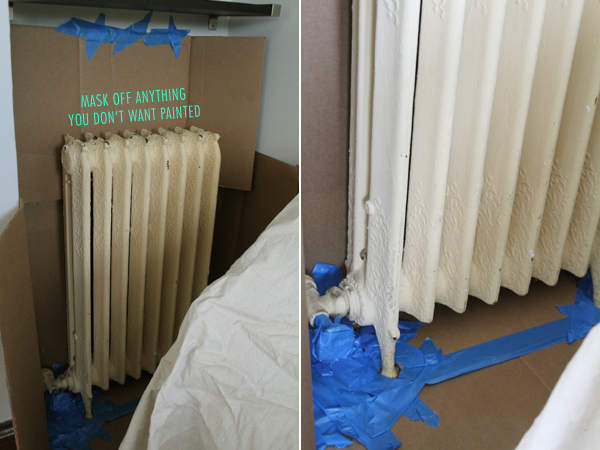 For prepping the space, I used some old boxes that I had been hanging on to for far too long and made a little spray booth. I was careful and made sure to tape off the valve. I’ve spent hours taking apart other radiator valves in our house that had been previously painted shut by the old owners, I didn’t want to make the same mistake.

I only wiped down the radiator and removed dust from the surface. I’m sure there is a good possibility that this radiator harbors some lead paint. I didn’t want to get into that lead-mess with scraping and sanding and potentially dying. Lucky for me, there wasn’t a lot of loose paint. For this job, a good wipe down was the way to go.

Next, I opened all the windows and went to town. I’m sure I lost a few brain cells in that fume factory but the end result was totally worth it. No more old-mayo-colored radiator!

Just in case this happens to you: I had a panic moment when I realized there was a dusting of paint over almost every surface in the room, but was relieved when I discovered the paint had dried in the air and wasn’t permanently covering all my other furniture. It was no thang, I just had to go around the room and give it a good wiping down when I was all done.

A final tip, I removed all my masking within an hour after spraying the radiator. There were small areas where paint had gotten on the floor and trim surrounding. Because it hadn’t dried all the way, I was able to easily wipe it away with a rag, a little elbow grease, and warm water. I’m sure if it would have set for much longer it would’ve been a bigger task to clean.

Share this...
12 comments
in Around the House, DIY, How-To, music room