Look, I Found a Steel Tank in My Bedroom Wall 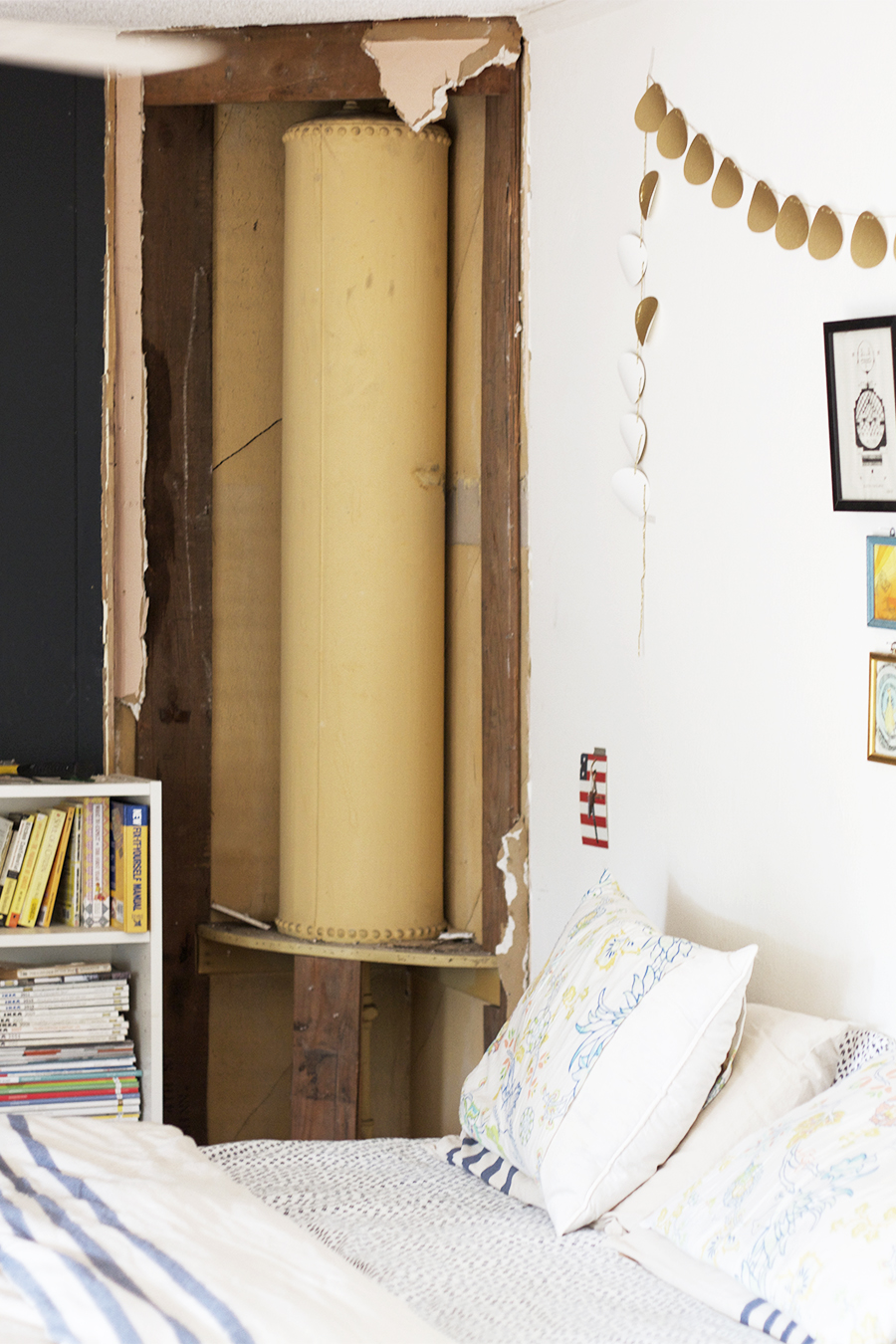 What up dudes? After a few long months of enjoying the summer weather and fully giving into the gardening bug I finally got the fire to start a new indoor house project.

Let me start at the beginning. In our entire adult lives Jeff and I have never had an adult-put-together bedroom. We have never had an actual bed, we only use a rickety bed frame and a pile books to hold up our mattress. We have a hodgepodge of furniture, much of it we have been carting around since we left our parents houses. After setting up the boys with super cool digs last fall I realized that they have a sweet bedroom, and we do not. Something was wrong with that picture.

I painted the bedroom back in 2012 – it’s a nice bright white space. The far back wall is made up of cheap paneling, I painted it black to help disguise it by absorbing the light and down playing it’s vertical grooves. I always knew the paneling was hiding something, why else would it be there? The paneling covers the back wall and then angles out in one corner. I’ve been curious to discover what is hidden behind that panel ever since we moved in. I knew it had to be trouble. After pounding on the walls I could hear a metal reverberation behind them. Since we don’t have duct work I had no idea as to what it could possibly be. I was hoping hard for some sort of sweet time capsule.

Last Friday morning I decided to solve the mystery. After feeding the kids some breakfast, something magical took over my body. I was possessed. I have a bad habit of starting projects by putting myself in do or die situations. I ran down to the basement, grabbed a crow bar, a hammer and a blade and headed back up to our bedroom to finally reveal the secrets of the corner wall. I got the panelling down in no time, discovered drywall beneath, and within minutes I was sitting face-to-face with a large steel, yellow, riveted tank, connected to what appeared to be the radiator system. The can of worms was opened, you guys. I was secretly kind of excited about it. My husband, who had no idea what I was up to, was not. 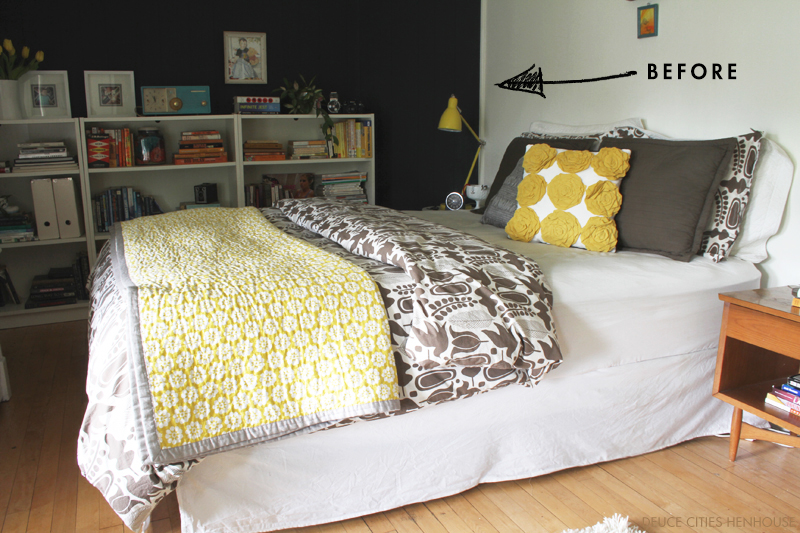 I had a visit from the radiator guy yesterday – he was hopeful that he could get my tank out that day, but after poking around a bit we discovered that the boiler system would have to be drained first before we could move the tank. Plus I’d have to remove some of the floor so he could access a connection joint to cap the pipe off. The good news is we can remove it! IT, is an old radiator pressure tank – in case you were wondering, and he’s never seen one hidden in a corner or on a second floor of a house before.

So how did it get there? From what I can deduce, that corner used to be part of a closet. I believe there was a closet on either side of the room, just like in the boys room. Someone removed the closet to make the bedroom bigger, and in doing so they had to figure out a way to cover up this tank, thus the angled corner.

Removing this tank and repairing the plaster walls, ceiling and moldings is going to be step uno in a two step process. Before I can move on to decorating our bedroom I need to be able to start at square one with a clean slate. In order to get there I will have to make my way through a giant to-do list.

REMOVE HARDWOOD FLOOR : I’m a little uneasy about doing this but it’s the best way to access the radiator pipe connection that needs to be capped off. The other option would be to access it from the dining room ceiling, which is covered in the hated popcorn texture. It would be too much trouble to patch the opening if we accessed it through the dining room.

REMOVE SUBFLOOR : I’ll have to remove the subfloor making sure I’m not chopping through any wires.

REMOVE TANK : This will involve having my radiator buddy come back to remove the tank. Hopefully no more worms will be opened during this process and all will go smoothly.

RE-INSTALL SUB FLOOR AND HARDWOOD : Hopefully I will be able to put everything back the way I found it.

SKIM COAT PLATER WALLS : Between the plaster hidden in the corner and the plaster in the rest of our room, there is a raised edge created by years of paint layers. I’ll have to do some research and figure out the best way to skim coat the corner and level this gap out.

DETERMINE WHETHER OR NOT I SHOULD REMOVE THE POPCORN CEILING OR PATCH THE CORNER : This item is a big IF. Yes, I’d love to remove the popcorn ceiling or even drywall over it, but I’m afraid that it might be out of the cards. We are trying to work within a budget. I am worried that the popcorn ceiling contains asbestos, and in that case our only option would be to drywall over it. I want to do this at some point, and when that happens I’d like to do all the ceilings at once. Even though I hate the popcorn ceiling, the best option for right now might just be to patch it.

REPLACE CROWN & BASE BOARD MOLDING : There is only a shadow of the molding that existed at one time in this corner of the room. I am hopeful that I will find the same molding at a local salvage center, and paint it to match the rest of the room.


I’ve got my work cut out for me – big time. I’ll have to try and save a good chunk of this project for the fall and winter months even though I want to dive in now. I’ll be back later this week to share a “mood board” for the room – I need to have a prize to focus on. Wish me luck you guys, and if anyone has tips on removing hardwood floor, skim coating walls or opening large cans of giant worms, leave yer pal a comment :)