I Found My Soul Mate, and it’s a Chair. 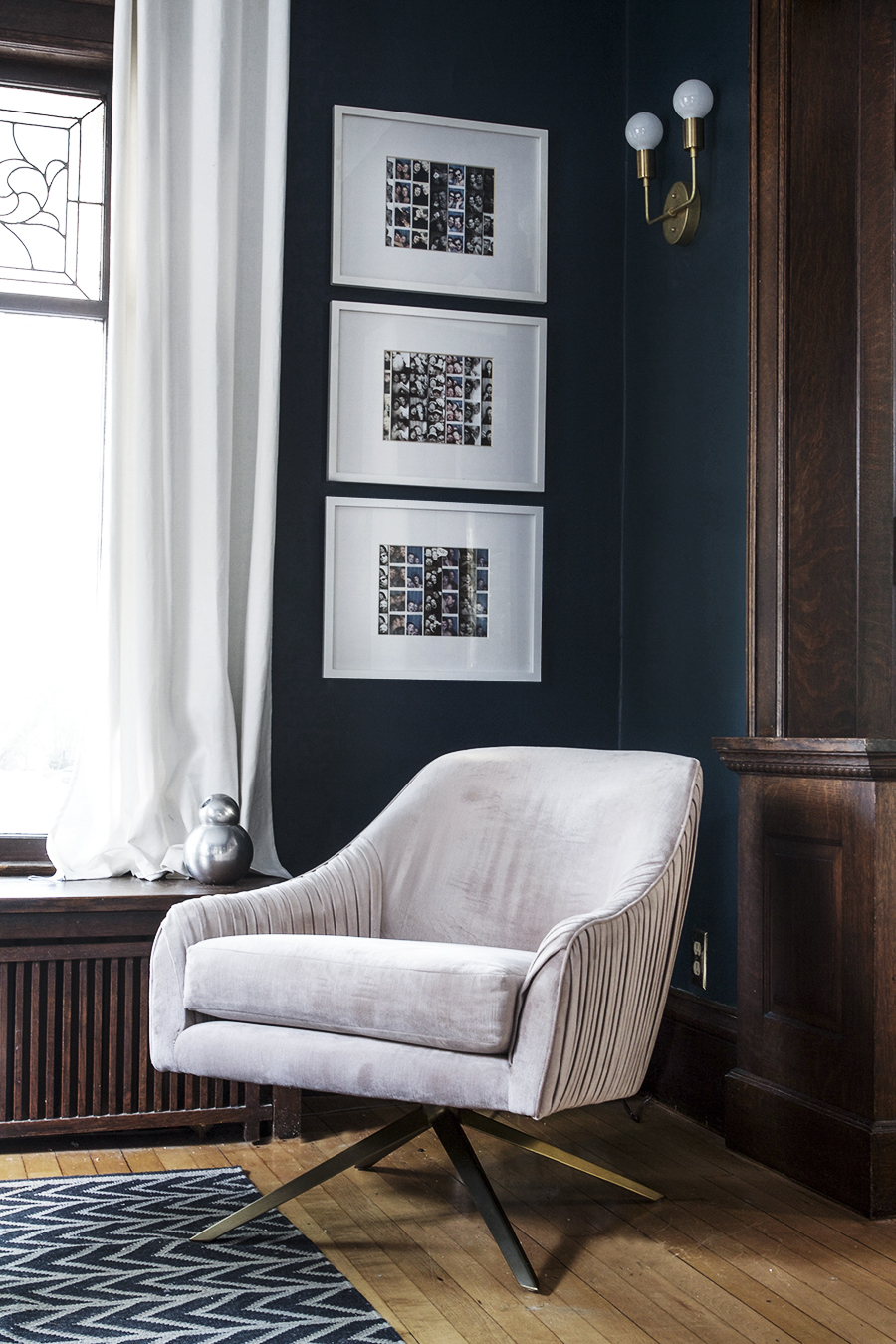 As part of the refresh I wanted to actually buy a permanent piece of furniture for the space. By permanent, I mean that a corner of the living room had been sitting vacant ever since the basement remodel last fall. At one point the space had been filled by a TV sitting atop a small dresser, but as soon as we were able to consume television in the basement that era ended. We’ve been sans-television in the living room ever since. Then a Bertoia arm chair had been filling the space, but was never meant to be a permanent solution – it’s natural home was in our bedroom.

To solve for this tricky corner, I initially had my eyes on a pair of rose colored chairs from Target and I even ordered a set ON THE INTERNET. But they had to be backordered, and in the ensuing purgatory I became impatient and decided to purchase an amazing blush velvet swivel chair from West Elm. Be. Still. My. Heart.

Talk about an intervention from a holier realm. I feel as though the big G himself put that Target chair on backorder just so that I could fall in love with this swiveling stunner instead. This chair. If I could marry a chair, this would be the chair. My love is eternal and unwavering.

It’s perfectly petit for my tiny living room, so comfortable, unbelievably soft (you kinda just want to pet it), and it has pleats, PLEATS! I would love to have another one. In fact, I begged Jeff. He said if I drafted a contract saying I would never purchase another chair EVER AGAIN I could have two of these. I am seriously considering his generous offer. 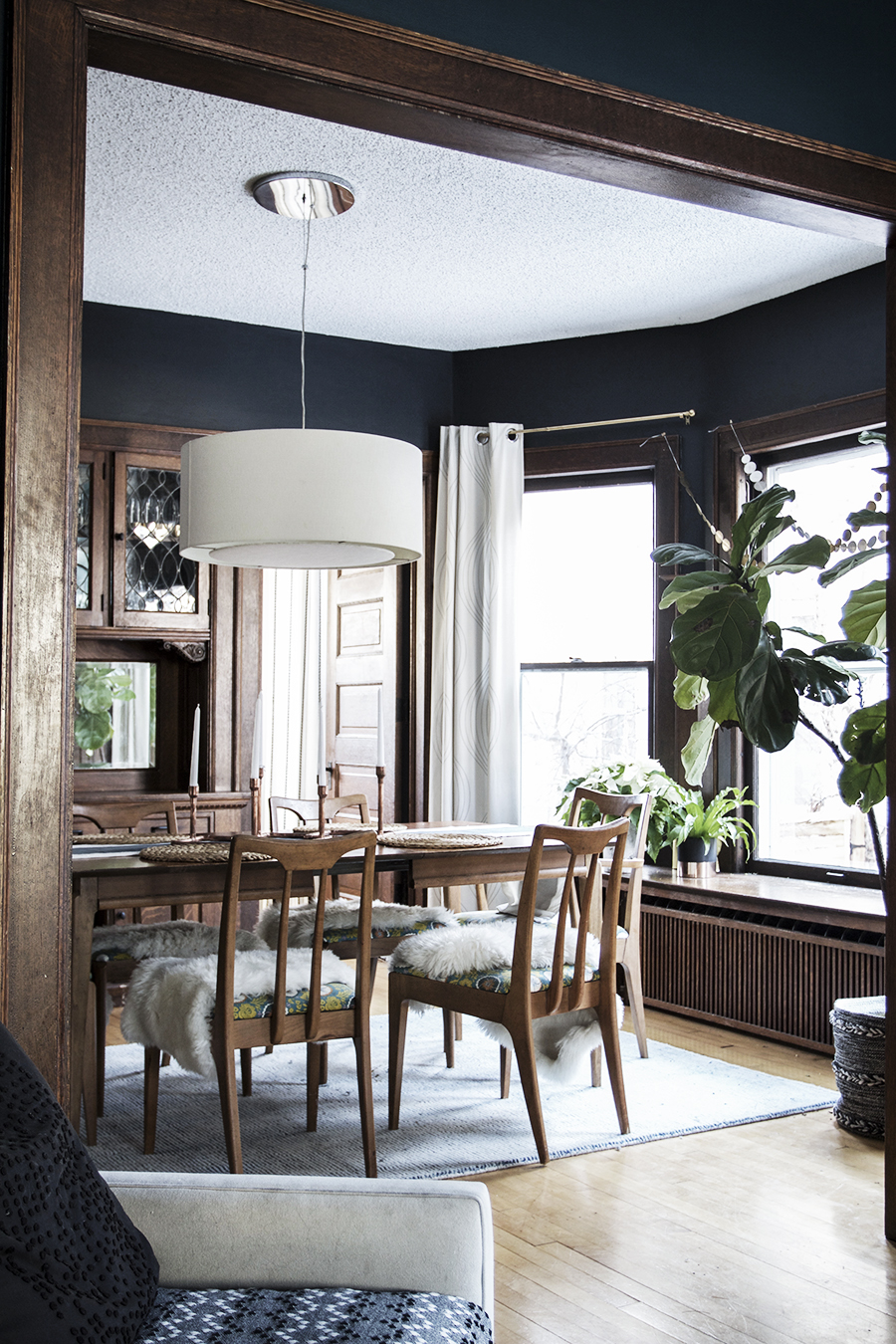 Also, I got a rug. I had tried a rug that was supposed to be a light pink, but once I got it home it appeared to be almost lavender and I couldn’t deal. I was a little concerned that maybe a rug wasn’t the the thing the room needed, and I was a bit hesitant about sending tons of money on expensive rug returns. Then I found this simple soft rug (also from WE). It has small stripes of dark blue and teal nestled in between rows of white. It does a nice job referencing the blue in the living room while also reflecting the light from the bay window in the dining room. I didn’t want anything too graphic since the living room rug is already intrusively grabbing your attention with an intense gray (used to be white) and black chevron-y pattern.

The last step of this refresh would be to recover the dining chairs with a light neutral linen, but for now I’m kind of into the sheepskins I throw on top of the seats to cover the stains (shh, it’s a secret). The other chair in the living room (not pictured but you can see it here) was looking worse for wear and a dude friend suggested that maybe I try a magic eraser to eliminate dirt spots on the arm rest caused by greasy hands — I was hesitant, but it totally worked. God bless the magic eraser. 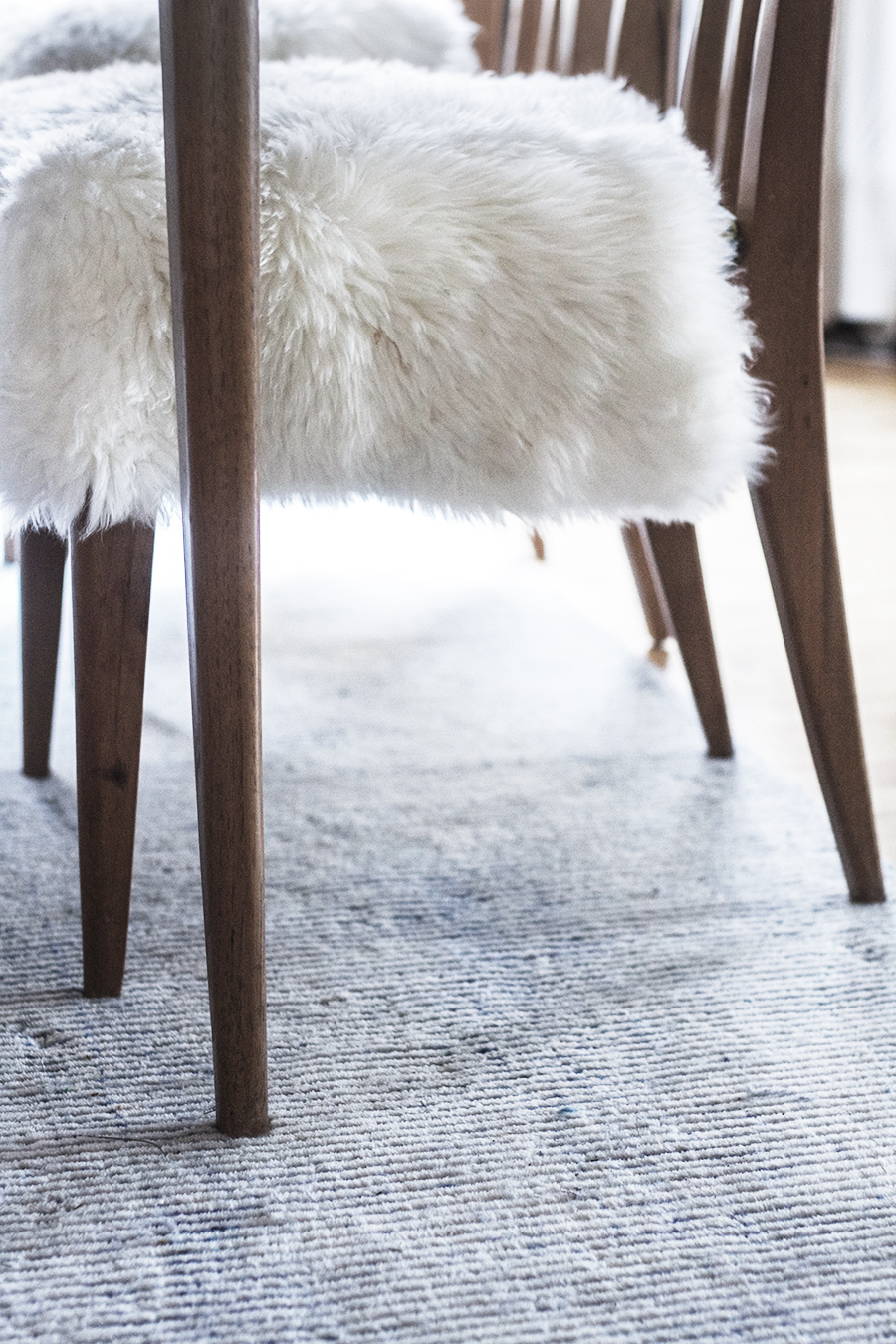 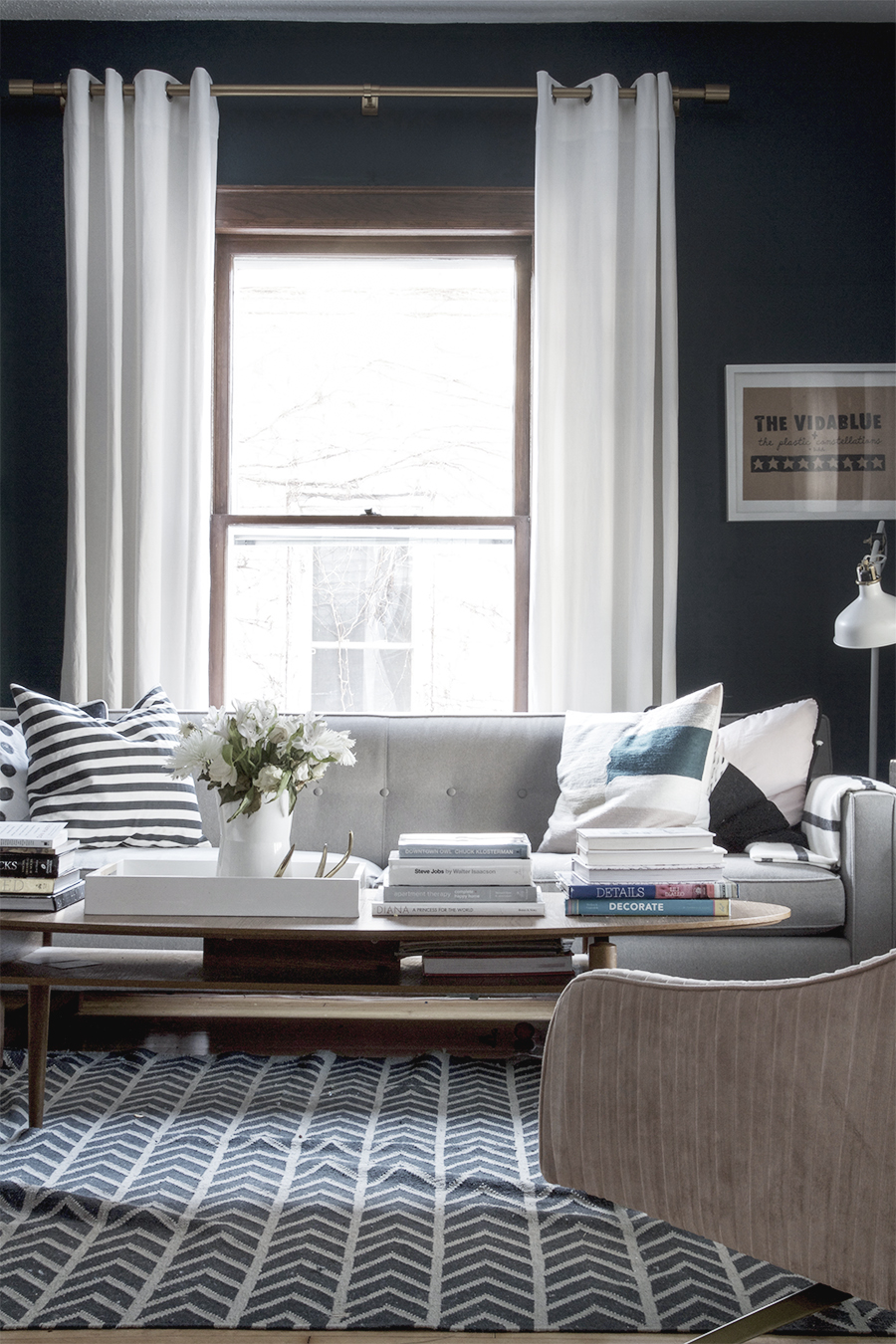 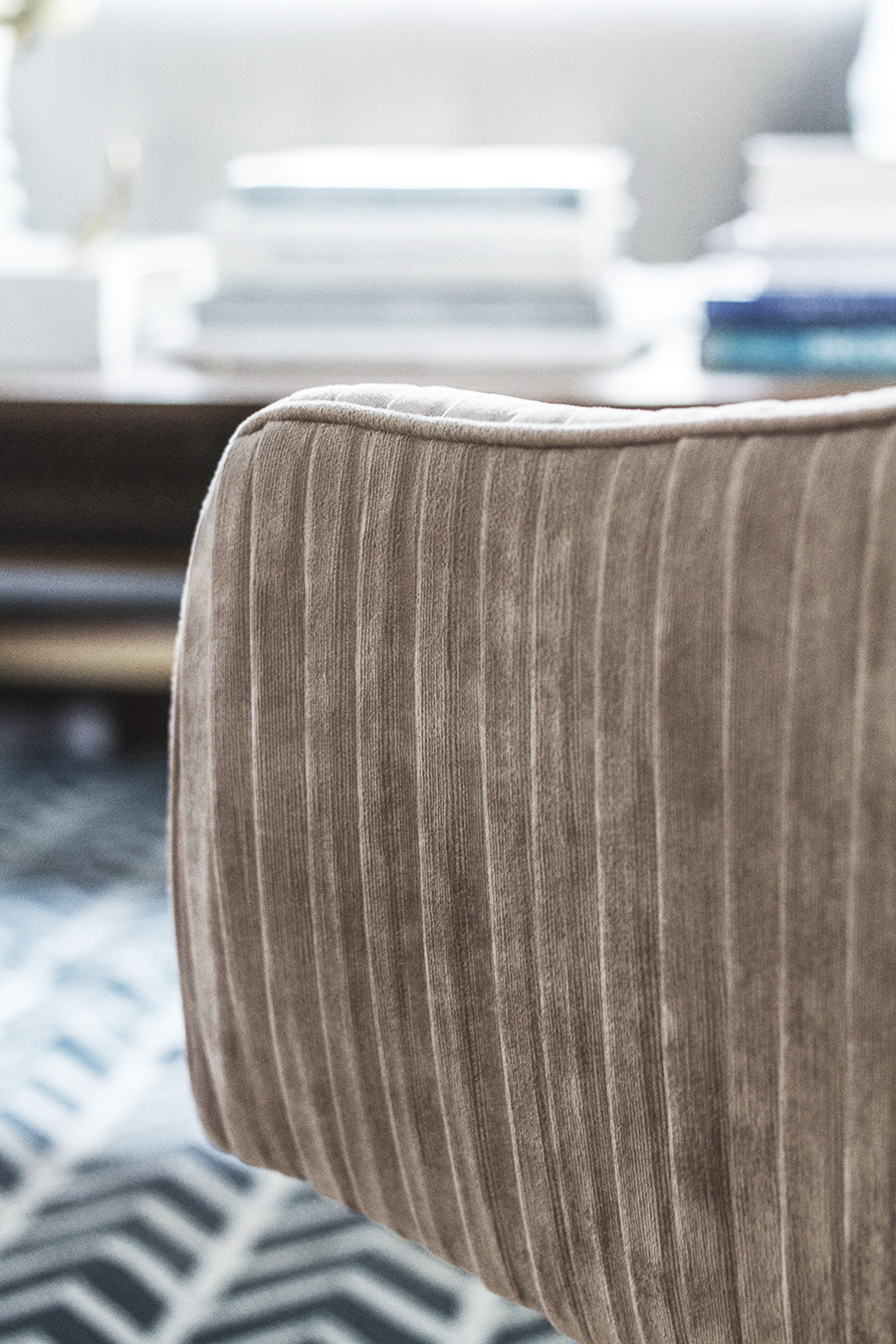 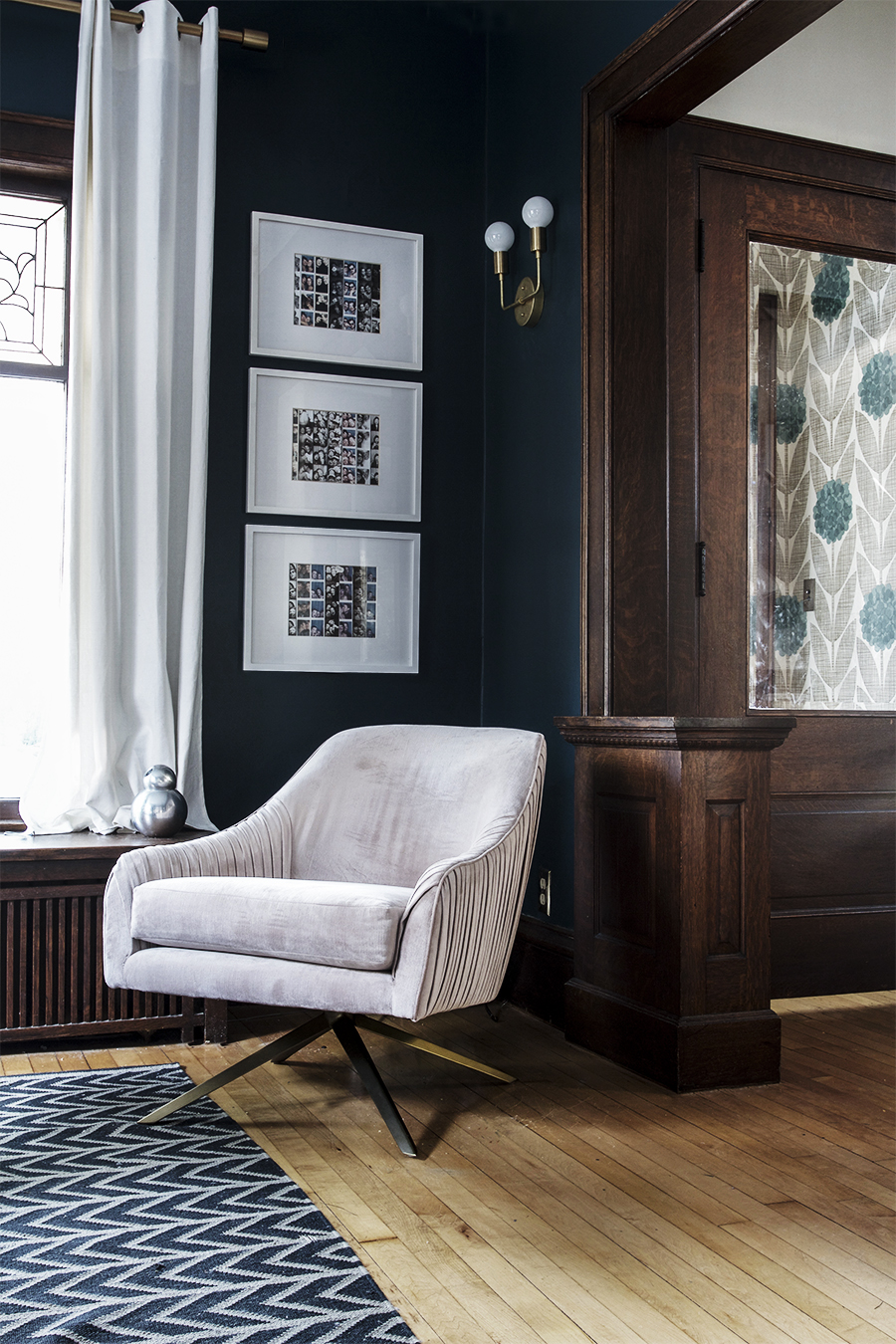 Can I just say that I’ve never loved these spaces together more than I do right now.

P.S. Don’t you love the way my kids stacked those cool metal orb objects like snowmen and I didn’t notice it ’till after I took all the pics. Oh well.