Clearing the Forest for a Woodland Garden 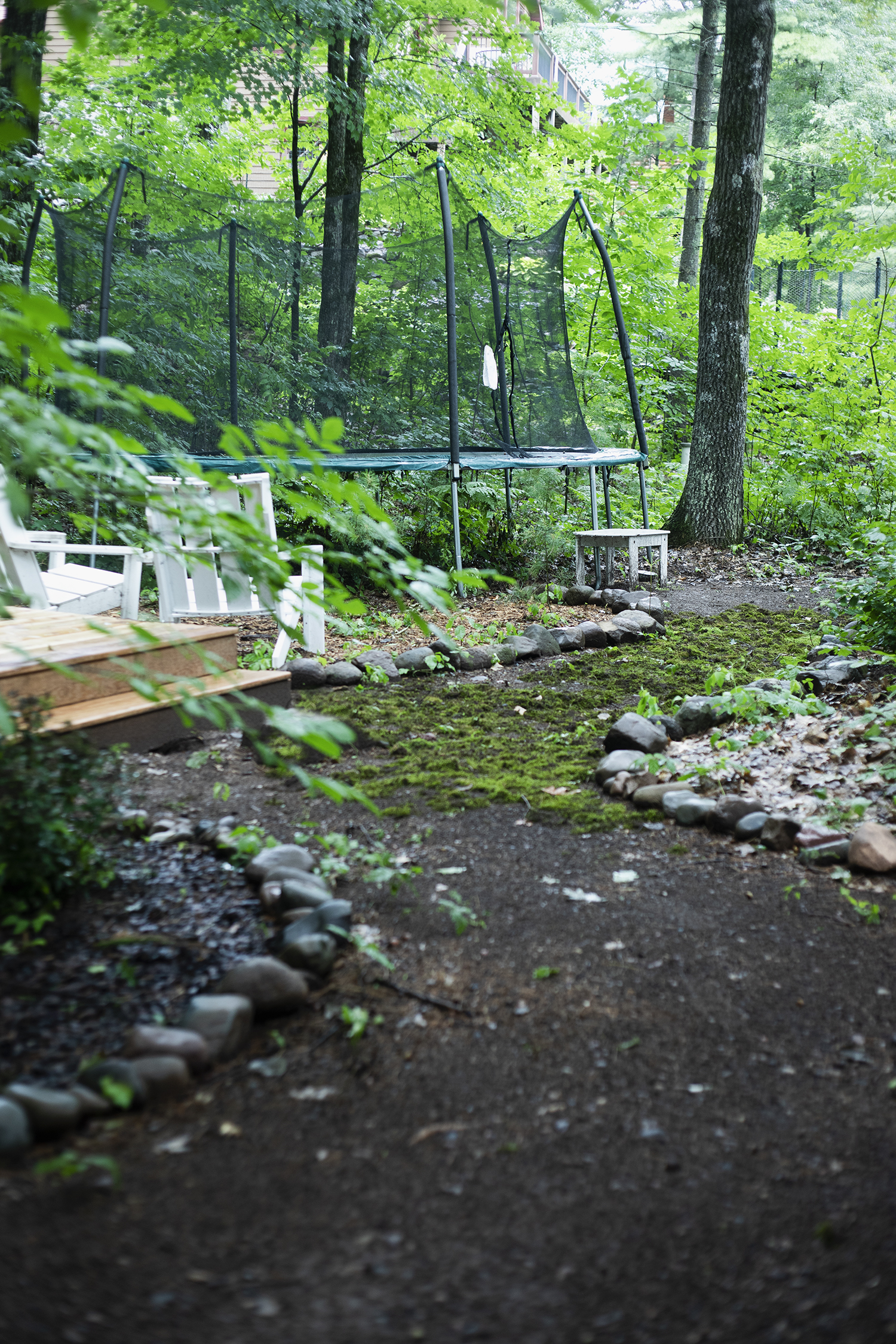 I’m sure I’m not the only one who has felt an array of feelings since quarantine began. Most of the time I fall somewhere between a complete lack of motivation, and sheer boredom. And then every once in awhile I’ll get a sudden burst of energy and I’ll do all the things all at once. That is what happened once I started gaining momentum on the new sauna area of our front side yard at the cabin.

It felt so good to have a project, I just couldn’t stop myself from going and going. We had planned on building the sauna deck on the edge of the woods, and then moving the trampoline further from the house and deeper into the woods – cause, duh those kids are so LOUD. That was supposed to be the extent of it, but then as the project started to evolve I found myself dragging around hose and rope to make pretend garden beds and trails and before you know it, we were clearing out the forest. 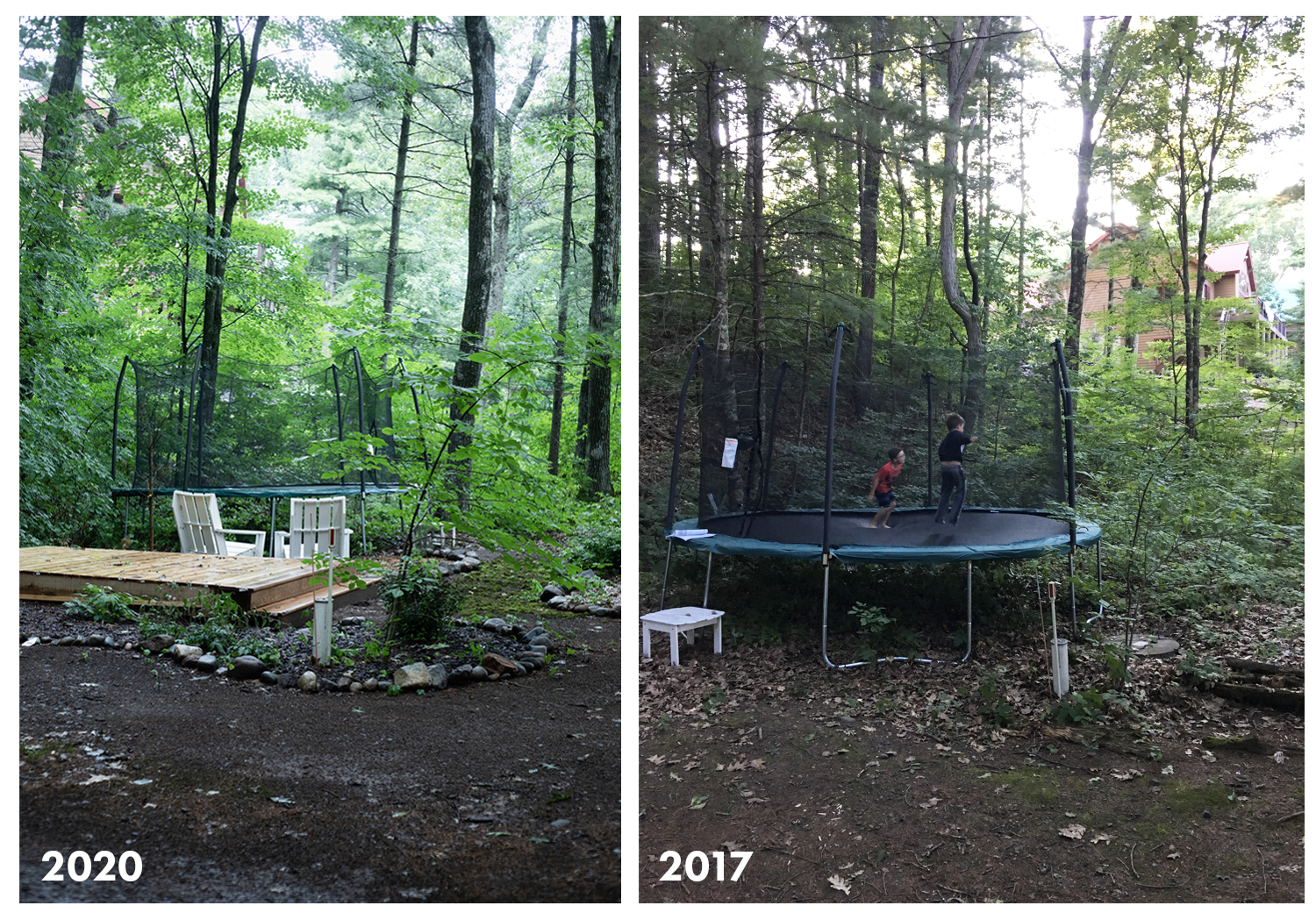 Look at these photos – one is from 2017 right after we bought the cabin. We had the trampoline positioned right off the back of the house because we didn’t really have a lot of options of places it could go. With the new plan we moved it further away from the house and are building the sauna deck around the area of where the trampoline had been. Do you get a feel for how much brush and poison ivy we hacked down to make room for a new landscaping and trails?

I really didn’t have a plan going into the landscape, I just wanted it to feel like an extension of the woods. Because everything in my Minneapolis backyard garden is so compact, I’ve never really gotten to experiment with larger shrubs, so I took this as an opportunity to try some new things out.

Squint your eyes a little because you have to imagine this space with a barrel sauna. The sauna will block a lot of the trampoline so it won’t be the first thing you see anymore! Now the first thing you will see is our awesome new sauna and to anchor it I wanted to have it nestle into garden beds. I looked a lot at pinterest for inspiration, and most of those landscapes are brimming with green foliage, hosta, ferns, rock borders and moss trails. This is my attempt at making some magic happen back here, with that aesthetic as inspiration.

Obviously, gardens take seasons to become mature and fill in, so you do have to use your imagination a bit, but I think you can begin to see the direction I’m headed. 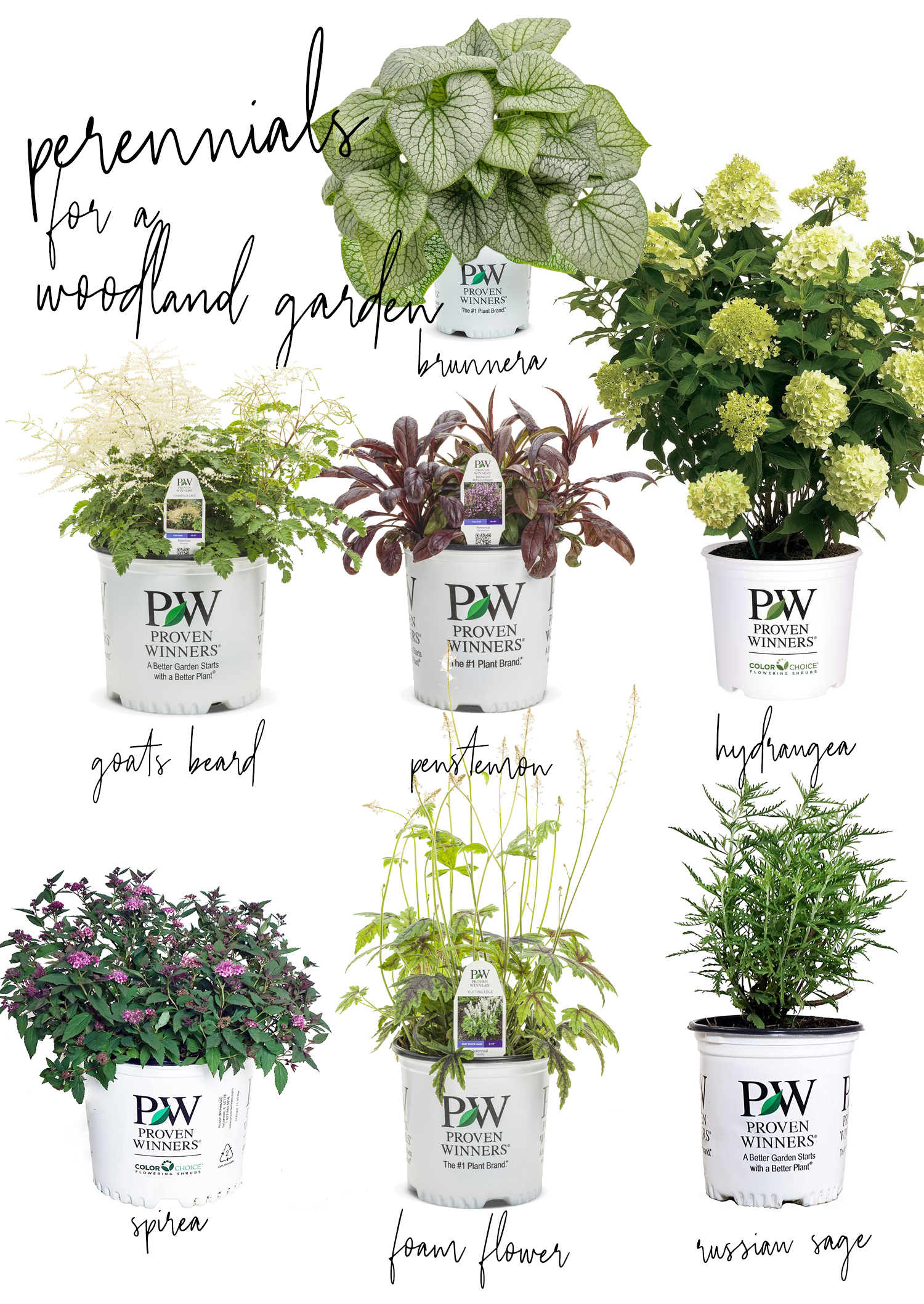 I found a very open-air nursery in downtown Hayward, and I had a great time buying a whole bunch of perennials and shrubs all at once. This is what I came home with. I paid a lot of attention to height and width, I used the goats beard as a backdrop for the rest of the garden, it gets tall and wide and has whispy bottle-brush style flowers. To the side I put one limelight hydrangea which will also get large just like the goats beard, I think it will add some texture amongst the larger shrubs I’ll be using. I also added to of the same hydrangea in front of our propane tank to help disguise it as its home is along the trail. I’m sure I’m taking a risk with the hydrangea as I’ve heard they are a favorite of deer, but because we are so active in this area, and because the neighbors have a fence around their yard, the deer don’t often make it down so close to our house. We’ll see how it goes, I guess! Towards the front of the garden I planted brummera which is totally new to me, I love the foliage and thought it would contrast well against the goats beard. I grouped together three foam flowers which are my new favorite. I planted two foam flowers in my garden in Minneapolis and I love them, I thought they’d be a great addition to this garden too. Behind the foam flower is a mound of husker red penstemon – it’s already flowered and is toppling over, but I promise it will be pretty next season. The stems on the penstemon get to be about 3 feet tall and they produce delicate flowers, it will be so perfect for the woods. I also planted three penstemon to the side of the front door along the cabin, and I think it will nice to have repetitive perennials between the garden beds. Lastly I planted a double play spirea, which I also have at home. I love the dark foliage and the smaller size of this spirea. Typical spirea can get up to five feet tall and wide, this will be about half that size. It’s tucked in the perfect spot and helps to disguise the lid to the septic system.

To create the trails I used rock that I harvested from the sides of fields and farmer’s rock piles. I found the mother lode in the back of a field and have been going there every other week to fill the back of the 4runner. The moss on the trail was all harvested from the tennis court in the woods. Why wood a tennis court have moss? Maybe because it’s dilapidated and in need of some TLC and it’s the perfect place for moss to grow? I’m not sure if I’m sold on the moss trail, I think they are really bright and pretty but I think it would be even better with some flat gray flagstone. The bare ground looks nice too, but I worry about kids and muddy feets and the moss helps lessen the dirt coming in and out of the house. I’d really like to get some landscape lights along the gardens and to illuminate the stairs of the sauna too. ‘Cause landscape lighting makes everything better. 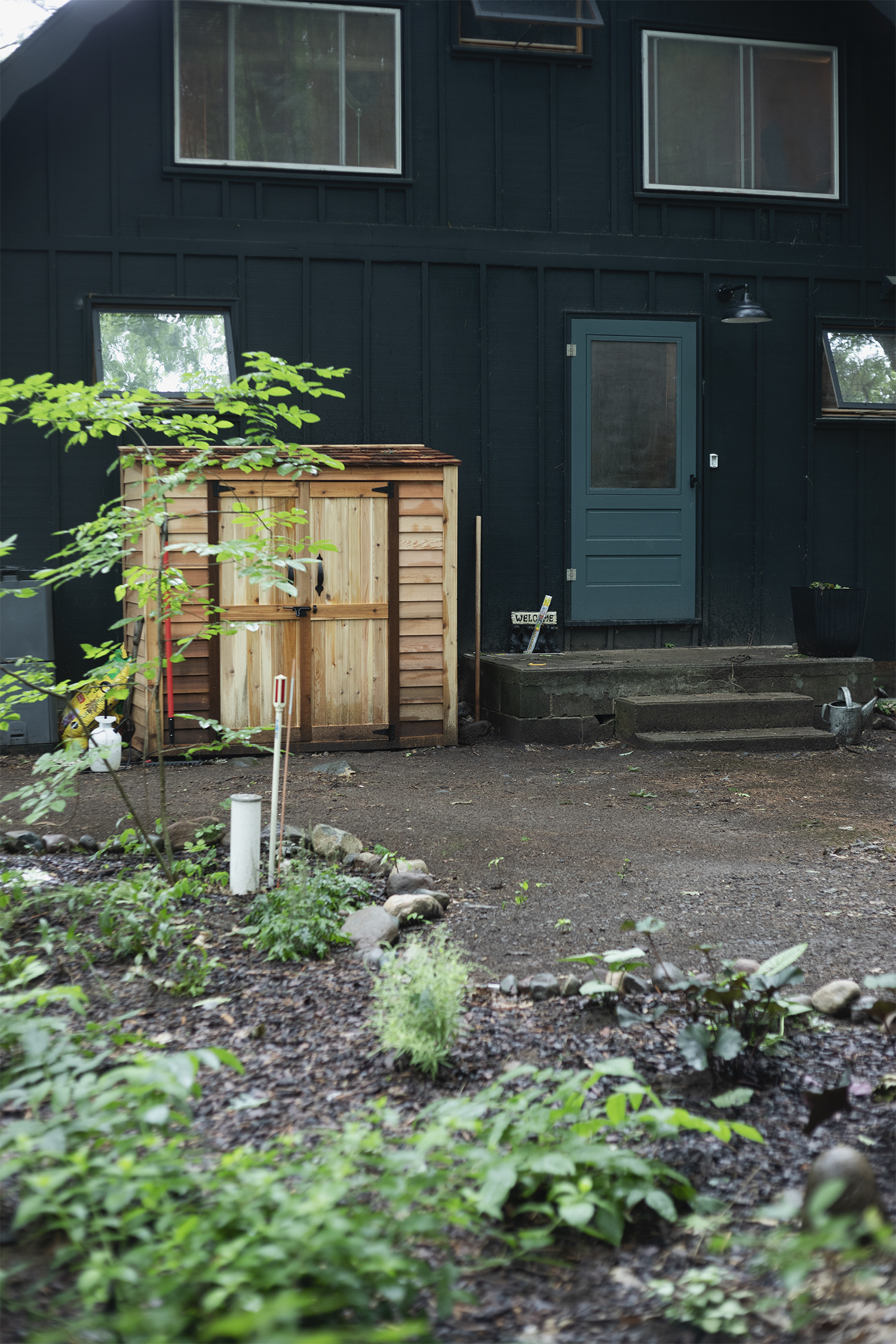 This view gives you a feel for the proximity to the front door of the house. 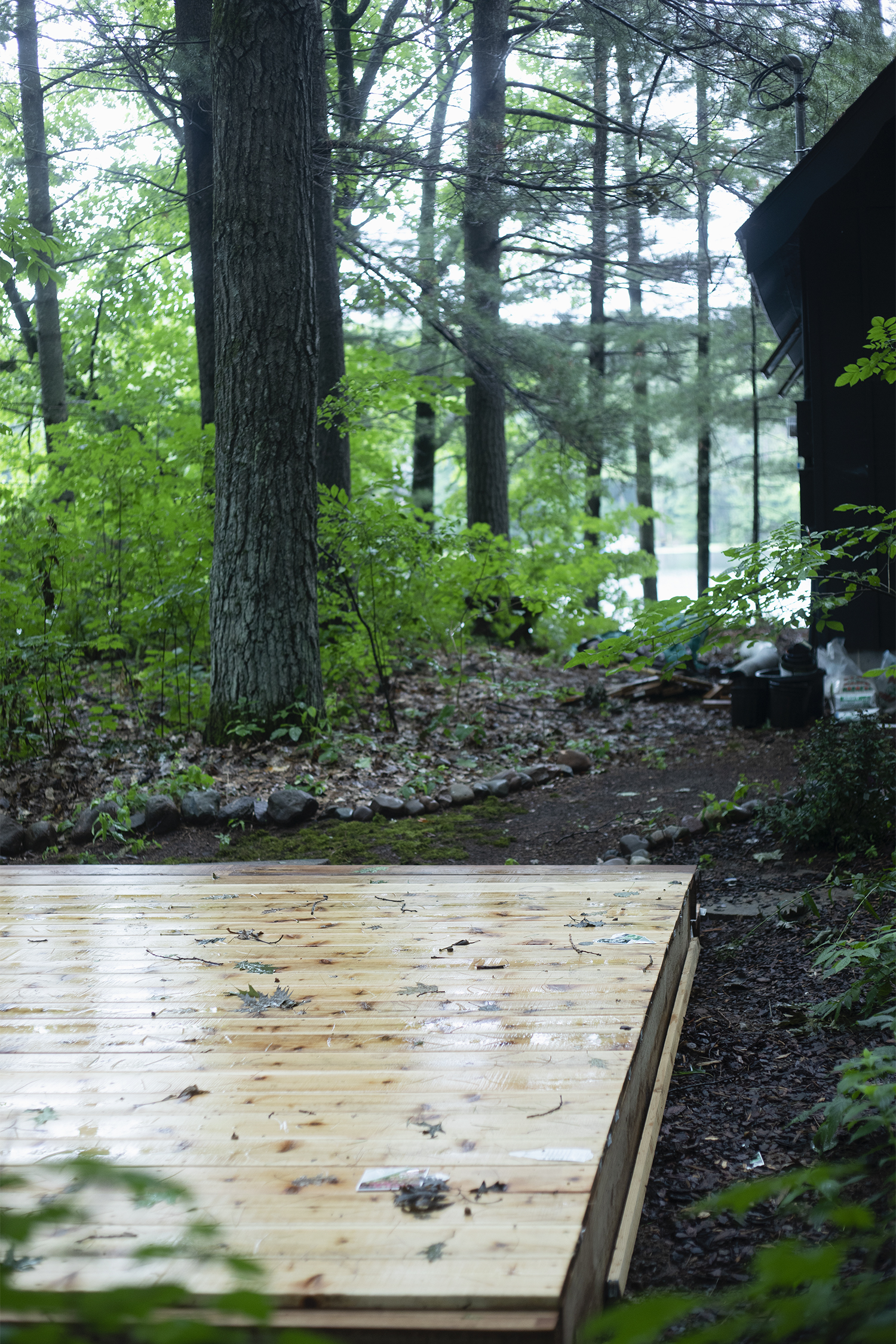 I included this image because I wanted you to see the potential for continuing the trail down the side of the house and straight to the lake. I really like the idea of the cabin having trails all around it too. I’ve already create a few down by the shoreline that go from the upper deck to the lakeside hammock. Why not just keep making trails!? 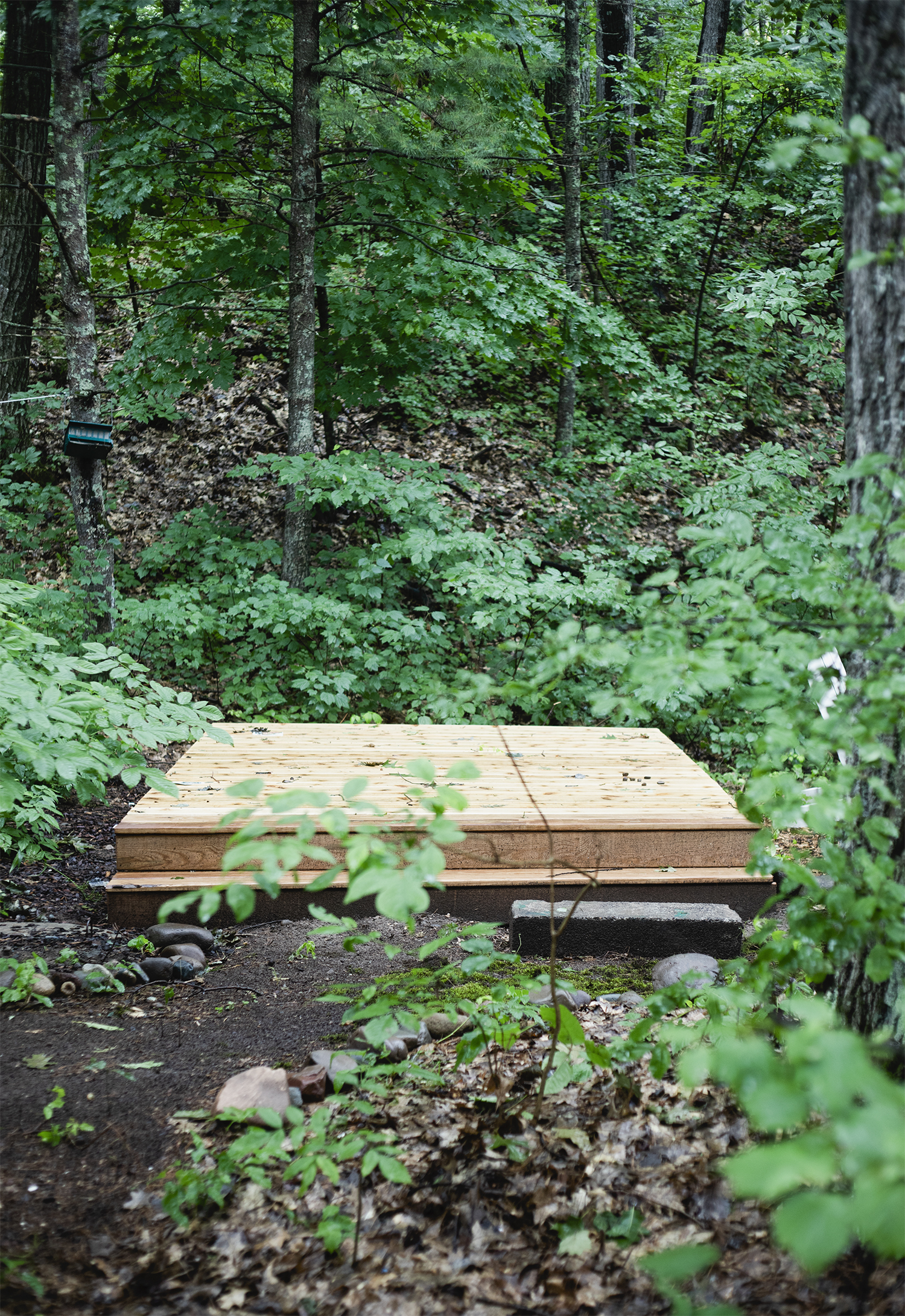 The sauna deck sinks right into the space. The sauna will have windows at both the front and rear, so when you’re inside you’ll feel like you’re right in the heart of the woods. It’s hard to tame a forest. 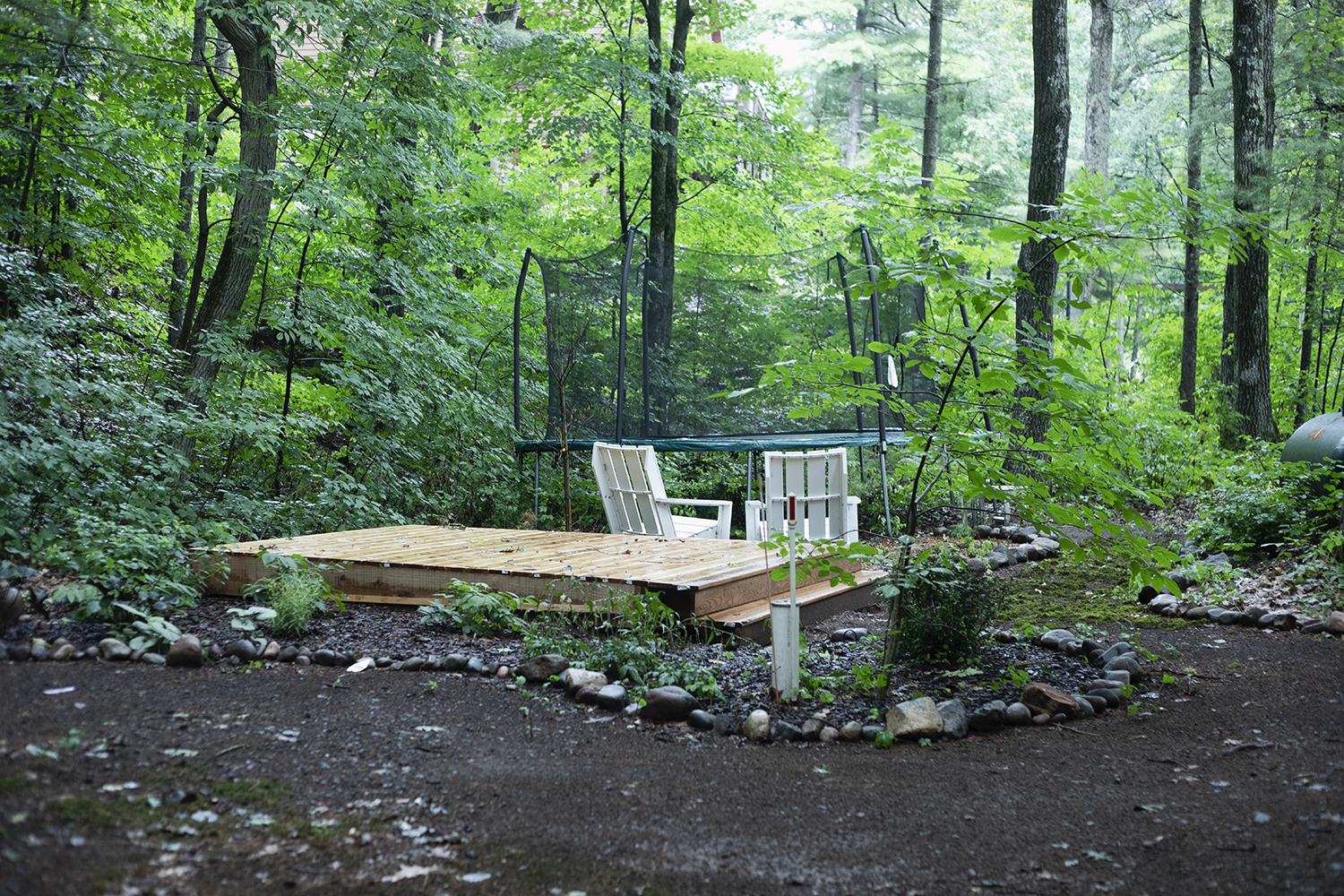 Older Post A Floating Deck For the Barrel Sauna