Making the most out of what I’ve got. 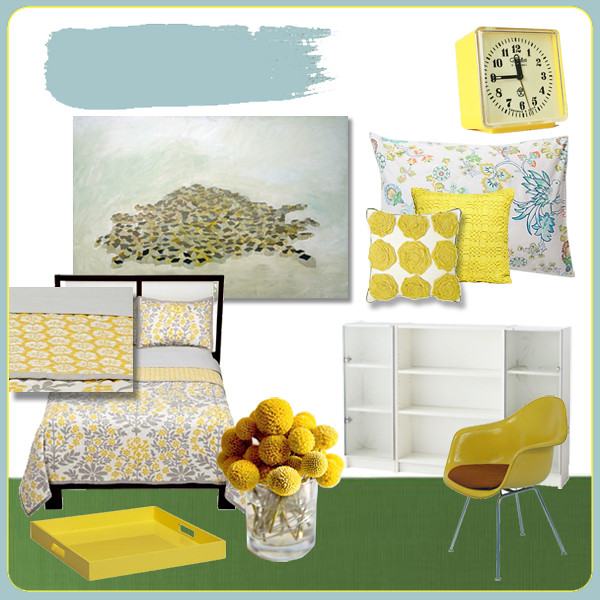 Well I think I’m starting to get a little energy back in these bones. For a good 2 hours this weekend I was inspired to clean, really good and it felt awesome. Cleaning wasn’t the only bug in my bones, after spending so much time in my room over the past few months I was starting to hate it. I have a cronic problem of never being able to pull a look together in any of the bedrooms I’ve lived in, and I was over it. So considering all the items I had in my house I put together this “mood board” in hopes of giving my room some direction for the future. 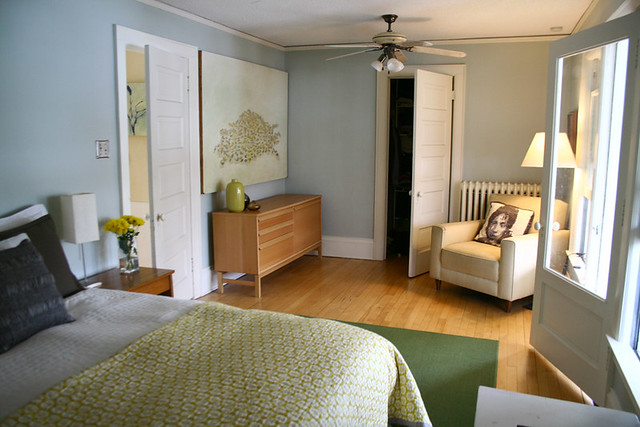 First item on the board is the paint color, actually it was the only decent paint color in the house when we bought it. A light grey blue, so I can’t complain and it could be much worse, plus I don’t have the energy to go around painting my bedroom right now, so I make the most of it and plan around it. Second, since replacing the green rug in my living room with this black and white rug. I now have a green rug with no home, and a space that needed a rug, so in comes this Hemmet rug from Ikea. Third, I have to consider a four-season porch that sits off our bedroom, it too is in the midst of being reorganized and changed around but it does make home to an orange colored chair. All of these elements combined makes figuring out this room a challenge, thus the “mood board”. 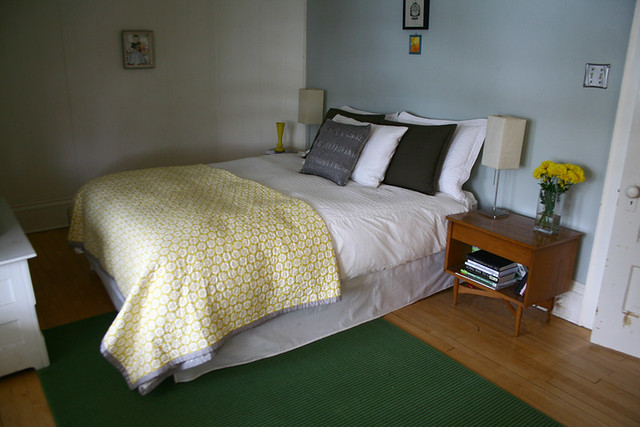 I’ve found that the key to figuring it all out is YELLOW, it’s the only solution I could come up with that worked. I had purchased a yellow quilt by dwell studio earlier this year at target, so it goes on the bed, I hang a large yellow toned painting that we’ve had in both of our previous living rooms on the wall above a buffet that has made it’s home in our previous kitchen and dining room. I grab some yellow flowers at the grocery store as a place holder for a not yet purchased accessory such as the vintage yellow clock pictured above. I order some pillowcases from Anthroplogie that I’ve had my eyes on since we’ve moved in, they help to tie in all the prominent colors (yellow, orange, blue, and green.) As soon as they arrive the will be going on the bed in place of the brown pillows I currently have. I feel that with a few more yellow pieces, this room will be poppin’! 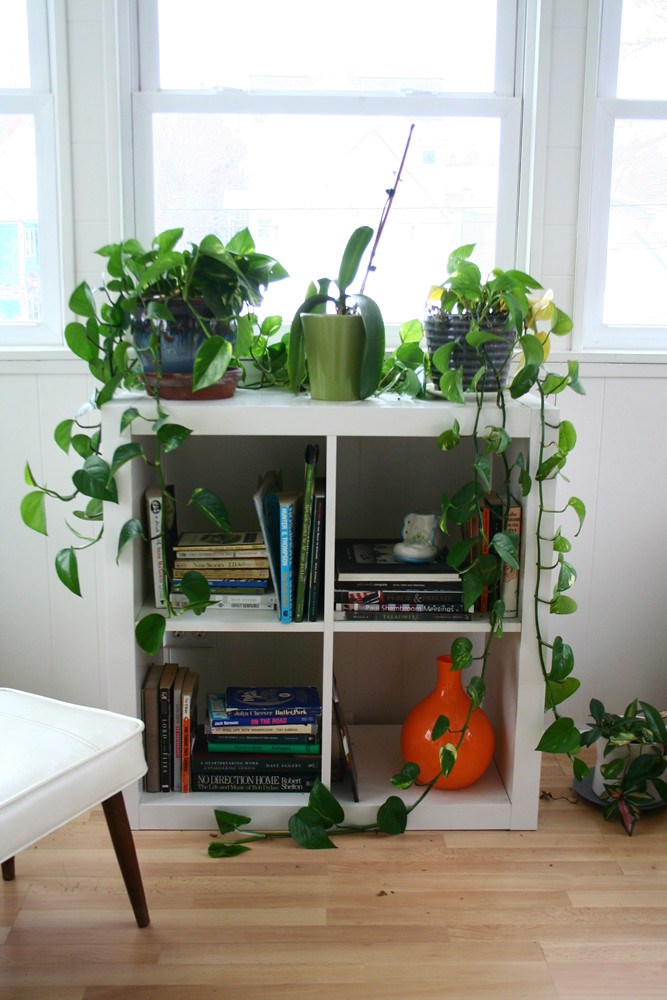 Onwards to the porch, this room has been coming together slowly, slowly, slowly since we moved in. I posted about it once last year and it was a mess. I would like to think it’s a little better now days. 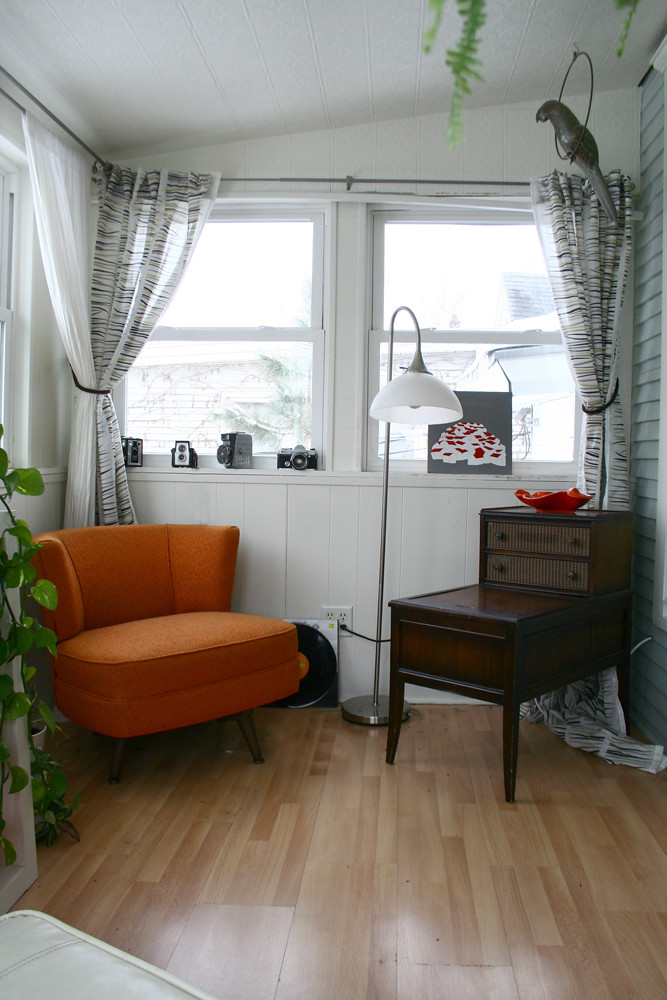 It’s a small space but oh so light and airy. I think it was possibly the thing that sold us on the house. We (Jeff and I) have an obsession with hanging out on porches and drinking beers all summer long, so when we saw the possibility of having this luxury in our own bedroom we were sold. Besides a “master porch” is way better than a master bathroom, I can pee down the hall any old day. So anyhow, we love this space, and we’ve adorned it with our favorite books, knickknacks and our little console record player (which also plays twins games in the summer.) 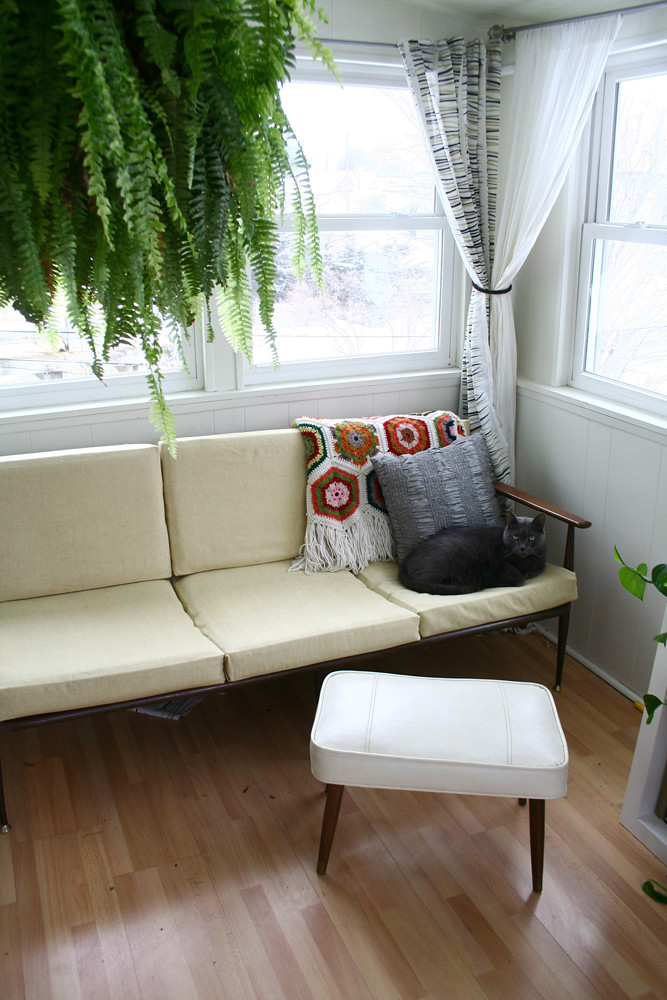 Down on this end of the porch is this sofa that we picked up last year in Saint Paul. I posted about it when we bought it but in case you don’t remember it was kind of awesome, but not awesome for my porch. The upholstery was a combination of turquoise, brown and cream colors and it wasn’t doing it for me. So I grabbed these curtains that the old owners left, cut em’ up, and quickly reupholstered this couch. It isn’t a forever solution but it is holding up pretty good for now, and the cats love it. I also was able to grab the curtains from our old living room and replace them with these heavy blue ones that came with the place.

And before I go I should mention that we’ve officially lived in our new (not so new) place for a year now, and in honor of such a momentus occasion I compiled to flickr sets a before and after if you will. Check em’ out if you’ve got the time.