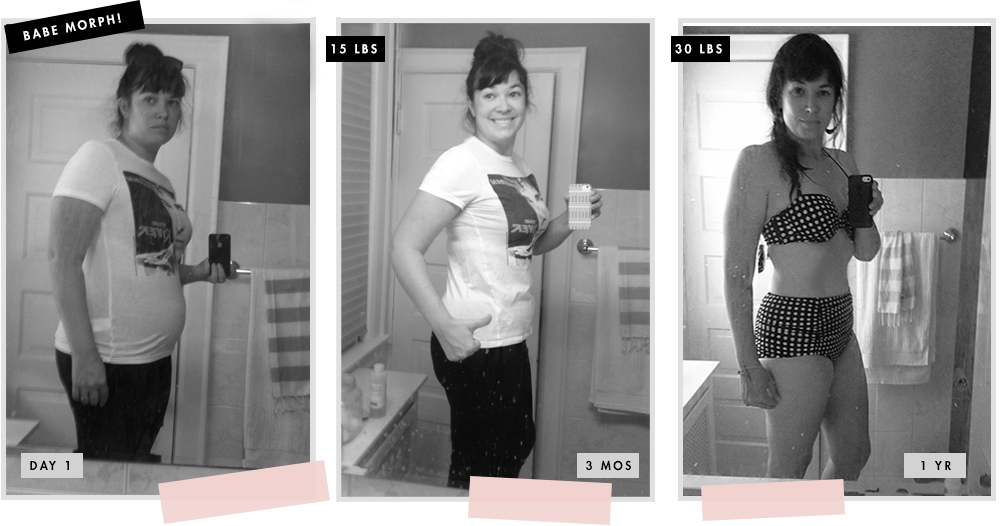 Heya Dudes! Are you guys fans of really weird bathroom selfies taken in a #teenish sort of way? I hope that you are because that is exactly what I have to share with you today. Actually it’s a little cooler than that, remember last year when I started my babe morph mission? I am super proud to share with you guys that just this week (1 year later) I have made it to my goal!

Well, I had two goals, one was a 20lb weight loss goal, and the other (that I never thought I would be able to achieve) was 30lbs. Guess what? I totally made it to 30, and I feel so awesome about it.

It’s been a year since I posted about this so just to refresh your memory; I was two years out from having my second kid and I still had a lot of baby weight. I was so over it! Not only that but I had been carrying around at least 15 extra pounds of beer weight from a Party Prime I took part in during my mid-twenties.

I woke up one morning and decided that I was going to change. I was going to lose the weight, and there was just no going back. It was making me miserable and I felt totally uncomfortable in my own skin. Starting that day I began walking 3-5 miles every morning, 7 days a week. I’ve kept it up for over a year, settling in recently on a 6 day a week walking routine. I leave my house every morning between 5:20 and 6:00 depending on the length of the walk. I’m an early, early bird now, incapable of sleeping in. It totally blows on the weekends.

However, I wouldn’t change it for anything. Not only have I lost the weight I wanted to, but the walking has made my body stronger and healthier than it has ever been in my adult life. I still might have stretch marks and stuff, but I feel better about myself than I ever have. Now I like wearing new clothes and dresses and swimsuits and shit, even though most days I’m happy in a pair of jorts and a muddy tank top.

Weight loss is very hard. It takes time and commitment and almost always it requires a lifestyle change. I remember the first month I focused on something my friend told me. It takes 28 days to create a habit. On those first days that I didn’t want to walk, or I was tempted to make bad food choices, I remembered those words and it became a mantra of sorts. I knew that if I exercised daily and ate well that there was no way around it; I would begin to lose weight. All I had to do was make it a habit.

I lost the first 20lbs by mid November losing only a couple more over the winter. The winter was hard and there were days that I would eat and drink and be merry in order to stave off those winter blues, that’s how us Midwesterners cope – but I still kept up walking every day. I can’t tell you how miserable it was to get up in -25º weather to drive to the gym to walk on a tread mill staring at my reflection in a window because it was too dark outside to see a view. I was committed though, and I didn’t want to give up on my goal. Taking part in those daily walks allowed me to maintain the weight loss that I had worked so hard for – therefore it was worth every cold, depressing, lame minute of it.

As soon as the spring came back I was outside again daily, and I am so happy for that. I decided that I wanted to go for the big goal and lose the last 7lbs – so I did!

I’m a year in now, and I hope that I stay committed to my goals over the coming months and years. I don’t want to go back and I don’t want to forget how much I enjoy walking and feeling healthy. I am proud of myself.

I also want to encourage any of you who are struggling with your weight, I want you to know you can do it. You need to make the choice and start a habit. In a way, it’s as easy as making a decision and being committed to that decision. Easier said than done, I know, but really that’s what it’s all about. I’m still walking daily, with my trusty fitbit at myside (or tucked into my bra as it were). Follow along if you wish or find me on the mapmywalk app (username deucecities), we can all be friends!

Thanks for listening to my story and looking at my funny selfie pics. I promise there will be no more.
P.S. I just looked at my fitbit stats and over the last year I have walked, 2,012.70 miles, tyte.