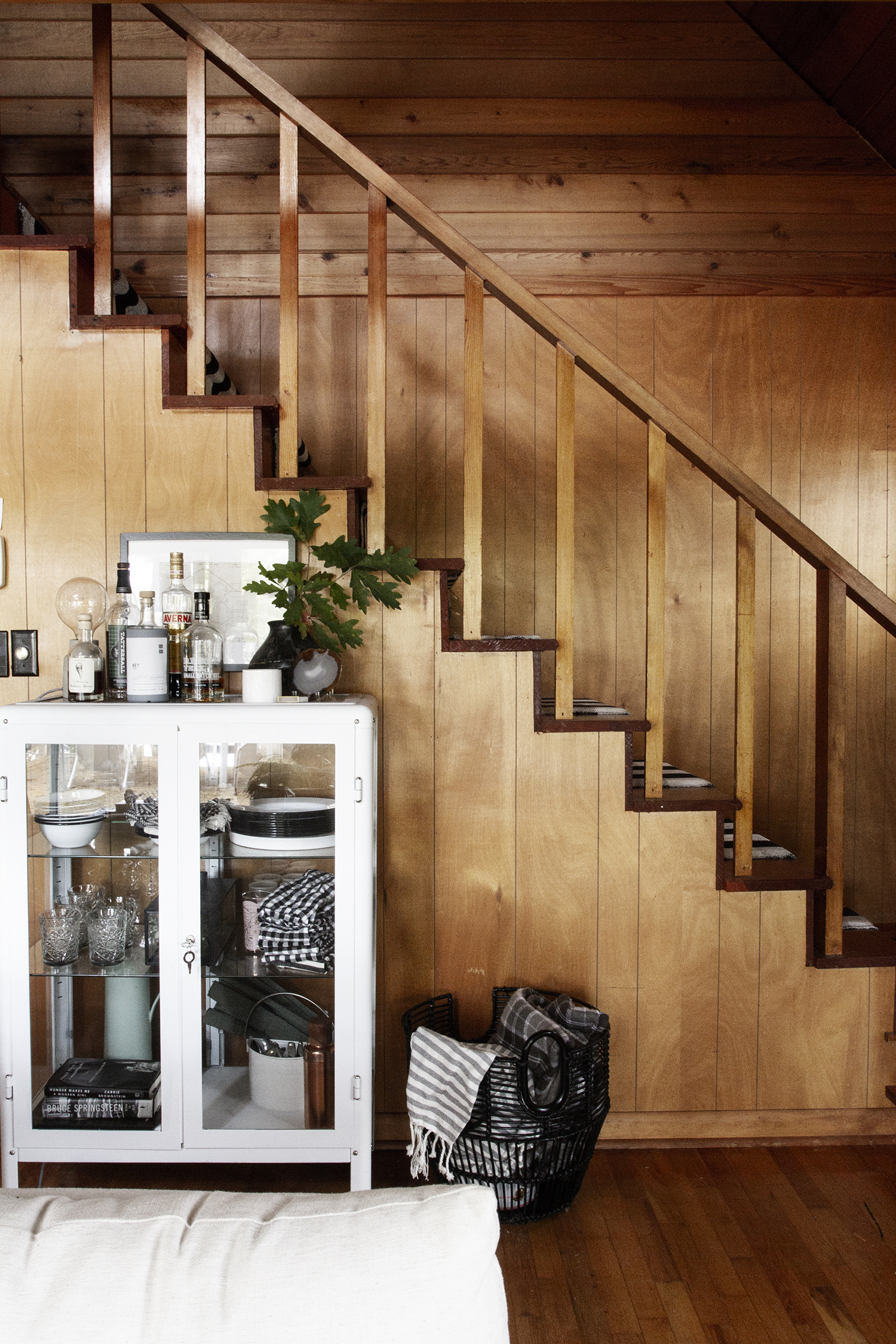 For the last year I have been slowly removing the wall-to-wall 40 year old carpet that plagued our cabin. Can you imagine how many wet feet and soggy bodies this carpet had seen? Barf. The majority of the carpet was ripped out the minute we closed on the place exposing the hardwood floors underneath. For months after I continued to find staples that needed to be pried up, but eventually we had the floors totally uncovered. There were a few areas that still had remnants of the carpet, and the stairs were one of them.

Imagine the year 1978, you decide that your bare wood stairs are just too undressed so you choose to have them carpeted in a shag carpet speckled in a cacophony of brown and cream tones. Because you love your uber plush carpet soooo much yoou will have decided that this carpet must spill over the sides of each and every step, up under the bullnose edges so it can be on display from all vantage points of your home. Your carpet is so thick that you decide to use millions of inch long staples to secure it forever, ensuring its eternal resting place.

Now imagine this actually happened and it’s 2018 and nobody likes old shaggy brown carpet anymore. However, I hope you can understand that no matter how ugly and stinky, the plethora of staples is the reason why I avoided tearing out the carpet. It wasn’t until Better Homes & Gardens scheduled a visit that I actually decided to face my fears, look my future blistered hands right in the face (or hands) and start pulling up that carpet and prying out those staples inch by endless inch.

Fast forward to the removal of aforementioned carpet. I now realized I had a new problem, slippery stairs. I decided to do a quick fix since I had a houseful of photographers and stylists and writers I was soon expecting. My solution was to lay the large buffalo check rugs that I had been using as door mats over the stairs. My resolve was temporary and I only used a few staples to tack them into place and get us through the shoot. It was cute, but wasn’t intended for the long term. Over time I grew to really like the look of my inexpensive stop-gap solution and decided to install the rugs permanently.

This fall I committed to properly installing the rugs the right way, with rug pads, and tack strips and all the stuff that would have them last and be comfortable underfoot. I wanted to share with ya guys how I was able to add a runner to our cabin staircase for relatively inexpensive using multiple small rugs. You could do the same with rugs, runners, carpets or tapestries. Here goes. 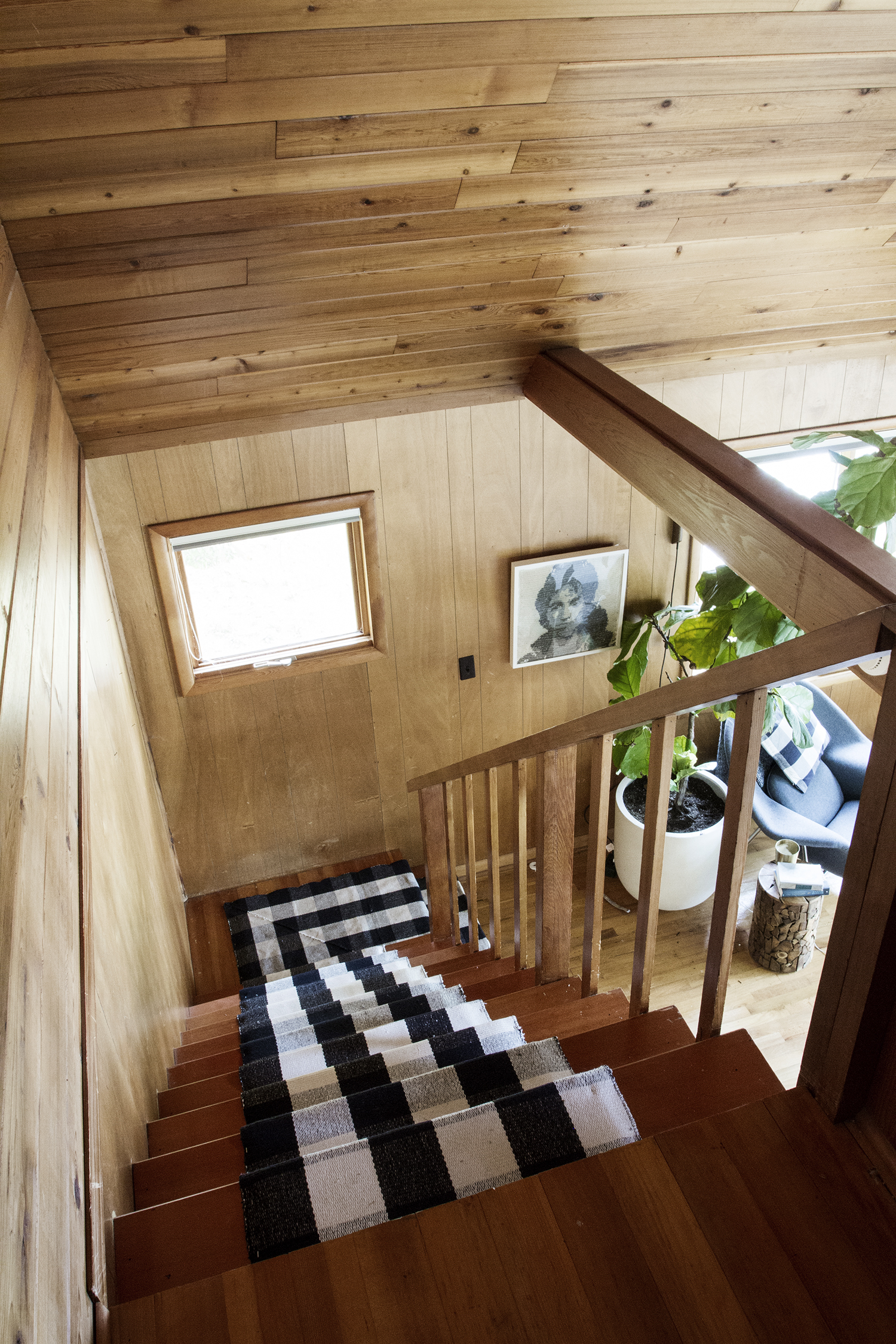 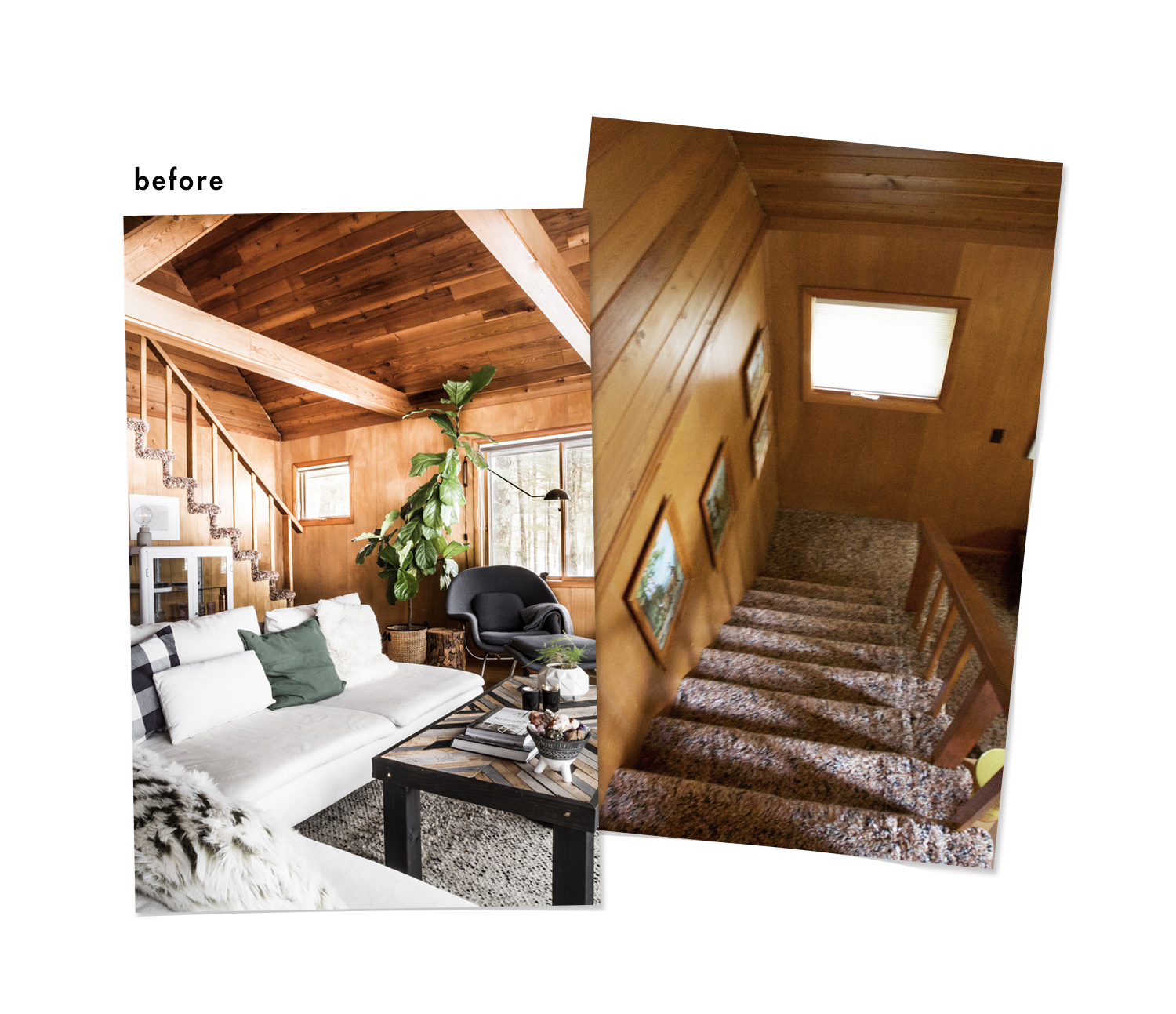 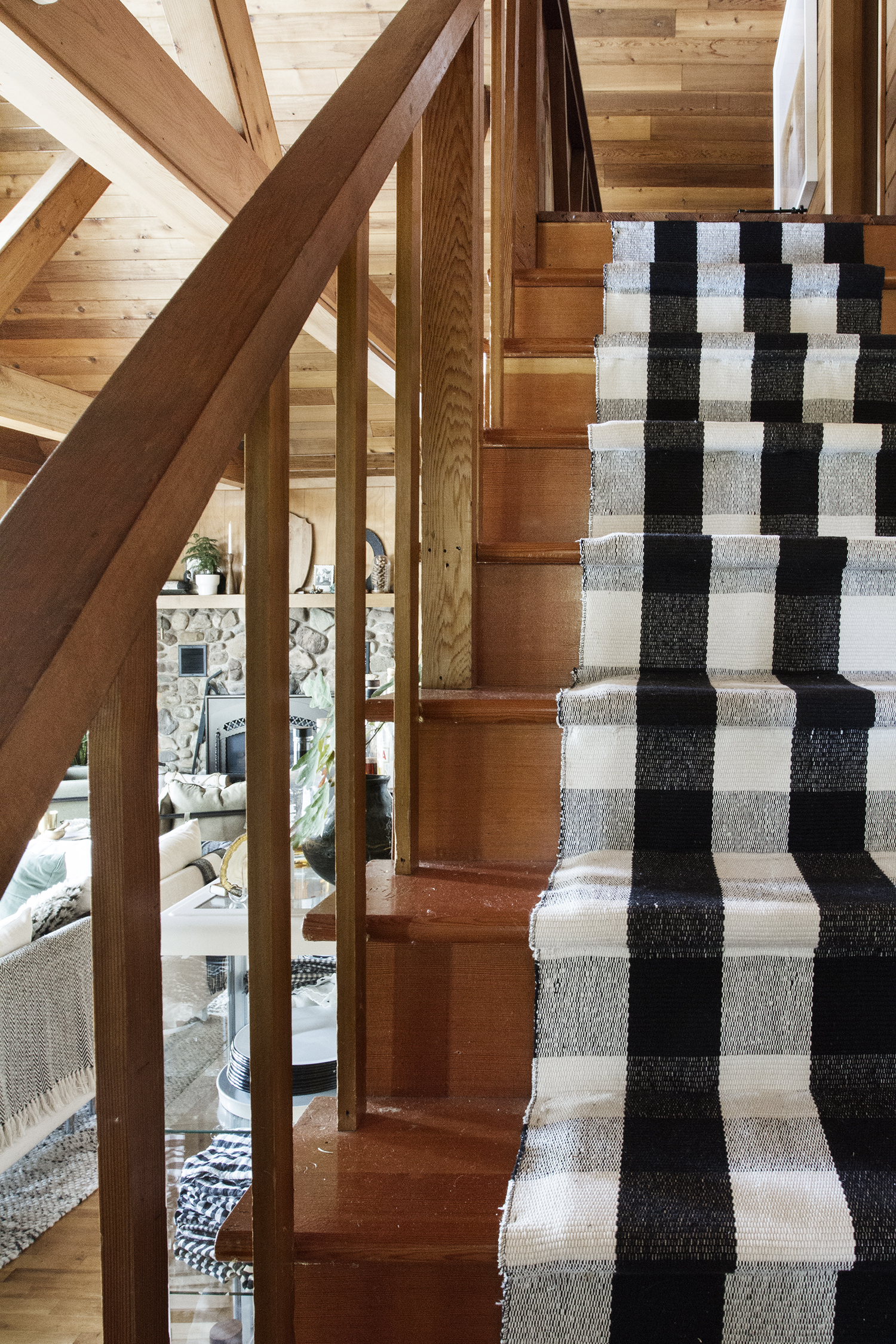 First things first. You’ll want your runner to be centered in the middle of the stairs. To do this, measure the width of your stairs and subtract the width of the rug you’ll be using, and then divide by 2. This number is the distance from the edge of your stairs that you’ll want the edge of your rug to be positioned, or as I am calling it “The Margin”.

I kept a tape measure with me during the install process to double check each step, and make sure I was keeping a consistent margin.

I also marked the center of each stair with a pencil. That way I could easily center the tack strip and carpet padding which were both more narrow than the width of the rug. For my installation I used a rug pad that was 24″ wide and I trimmed it to 22″. The buffalo check rug that I was installing was 24″ wide. Trimming the carpet pad would cover the rug pad by an inch on each side. 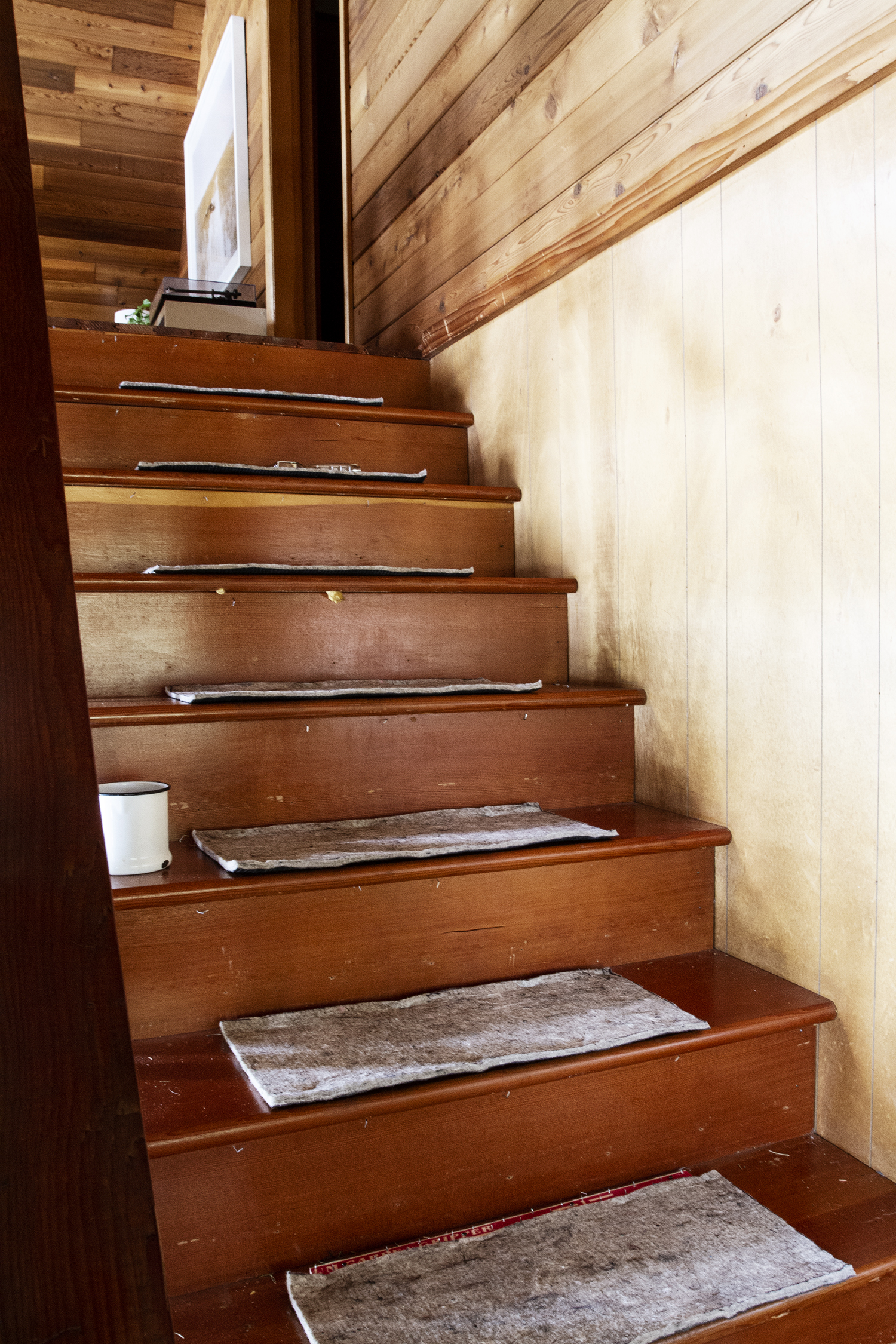 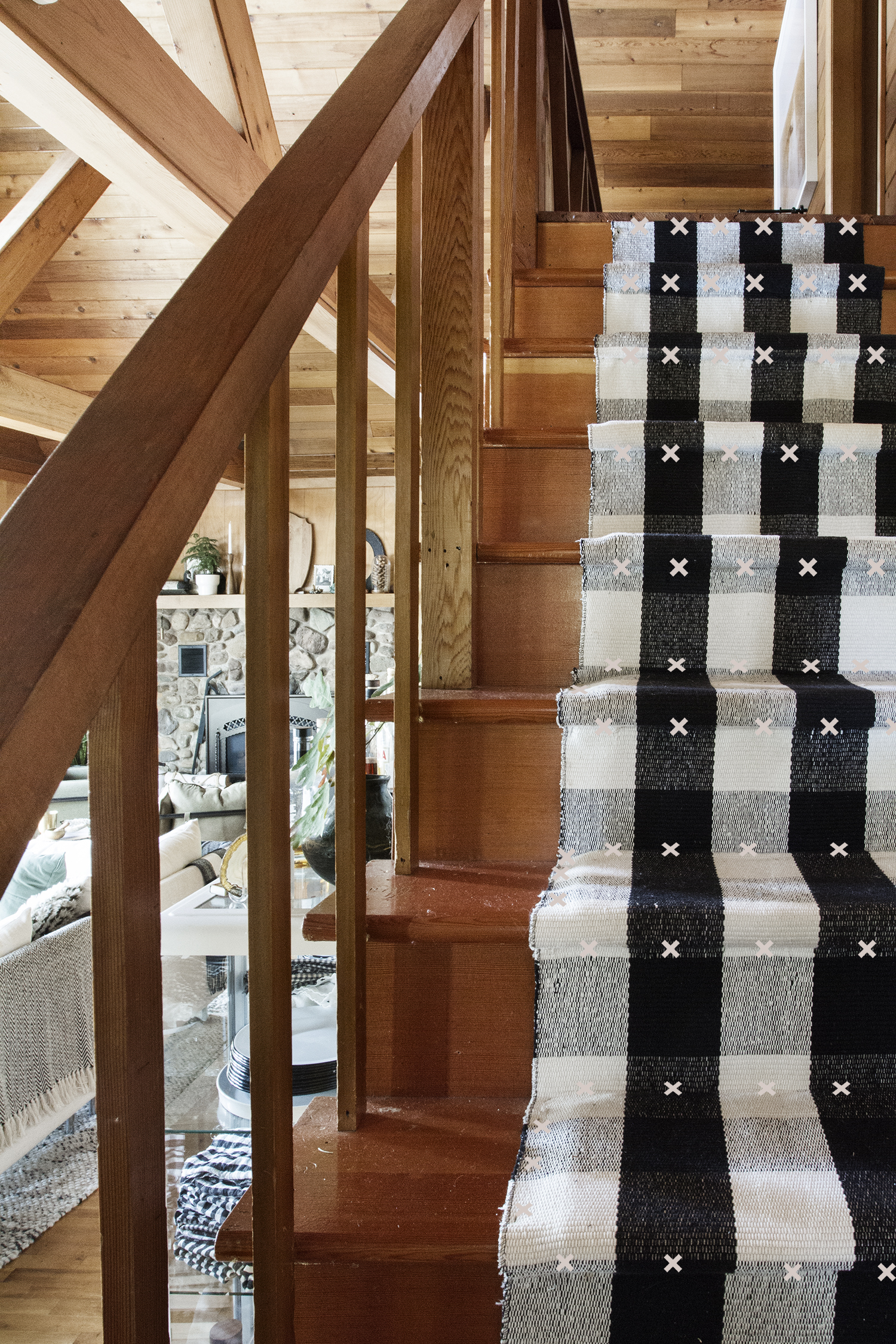 If you’re doing this on the cheap like I did, you might be using multiple rugs to create the look of one continuous stair runner. Follow the steps below to achieve this seamless look. 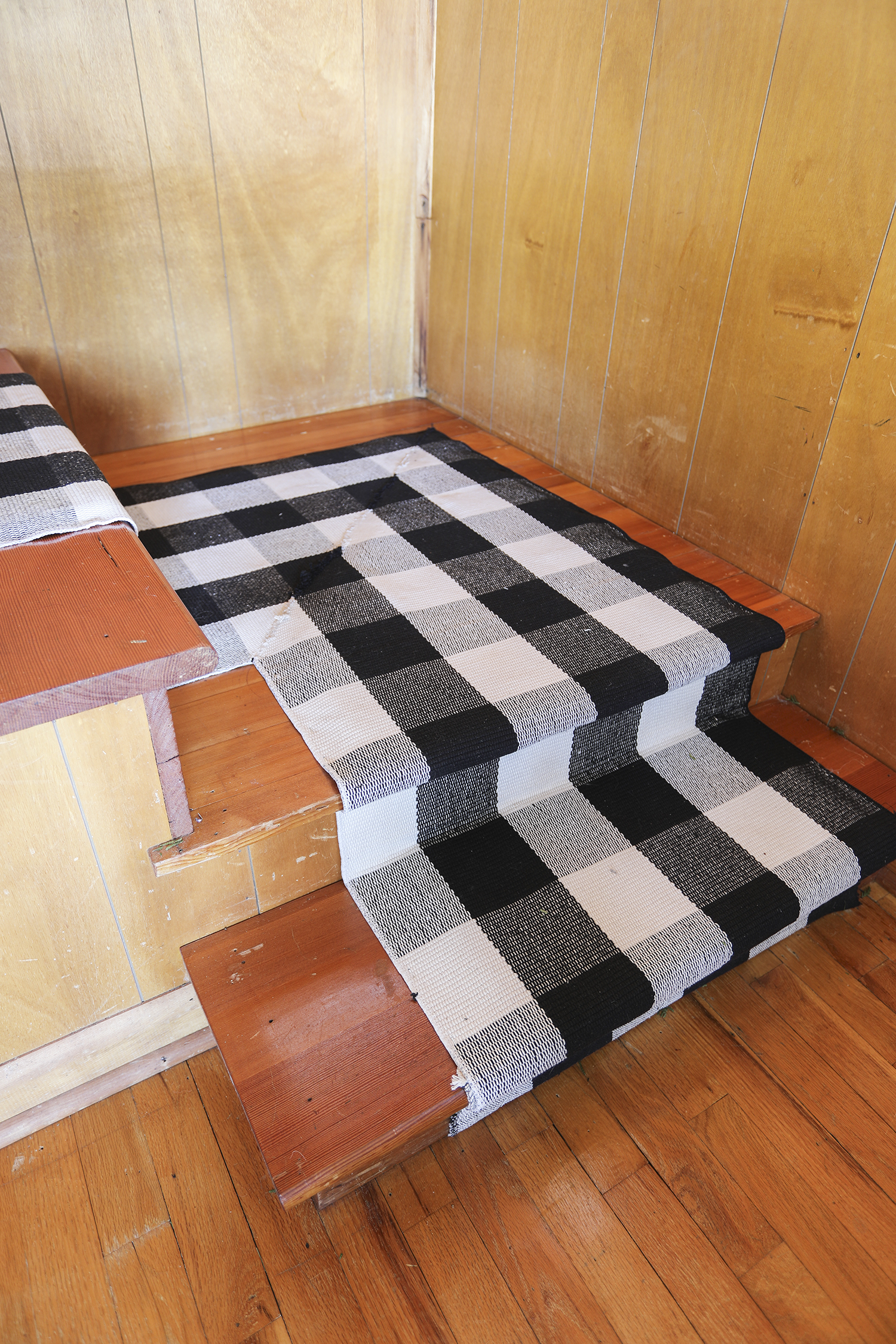 PART 2 : ADDING A STAIR RUNNER ON A CORNER

step-by-step instructions to add a mitered corner on the landing and continue the runner around the corner of our stairs. click here for all the details 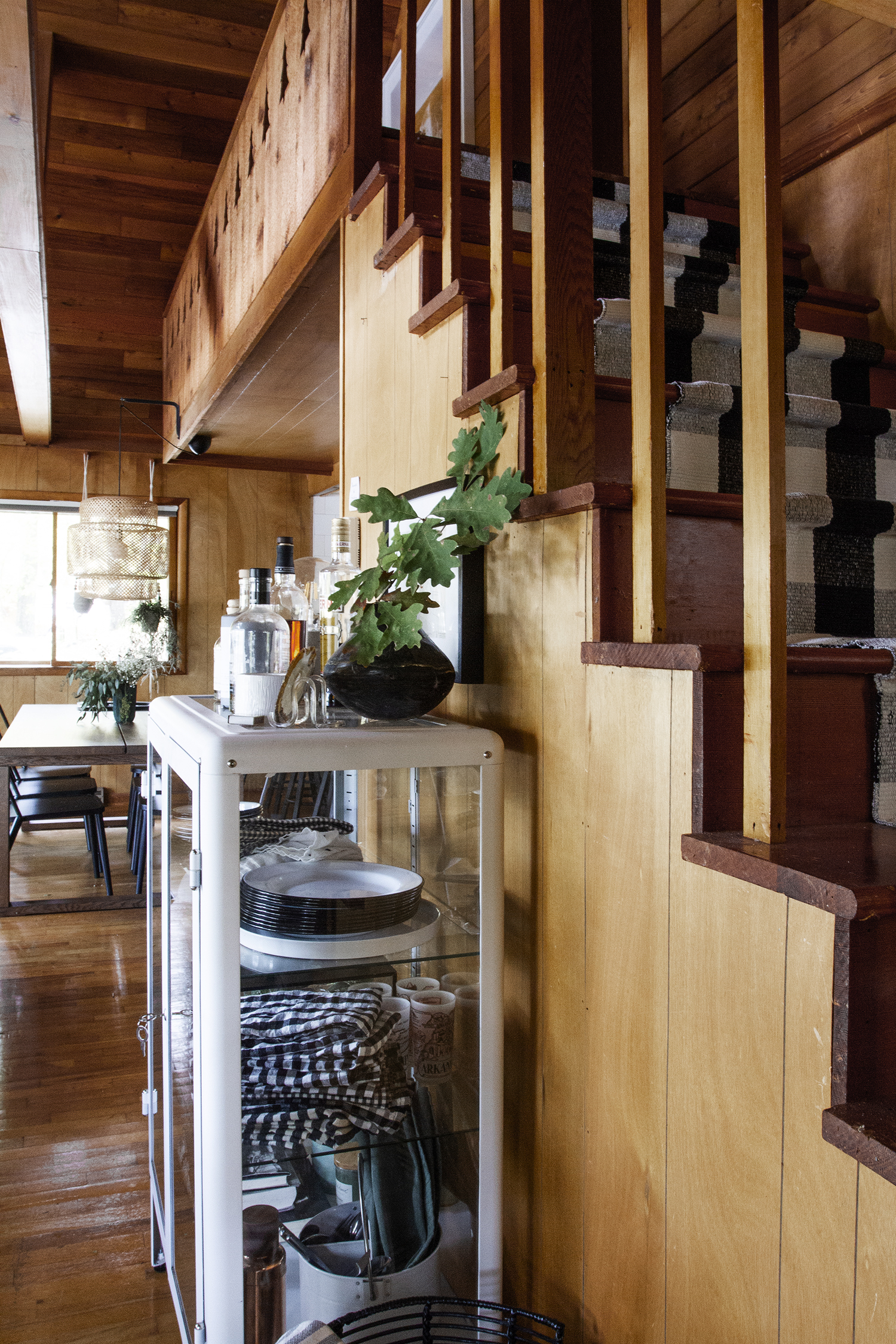 Installing the carpet was most def the easy part of this project. Wrestling to remove the previous carpet was both exhausting and disgusting. This project added a lot of character to the plain pine stairs, was reasonably inexpensive because I used lots of small rugs instead of one long expensive runner or carpet, resulted in a super comfy and cozy step with the addition of chunky padding on top of each riser, and the rug is safe and secure making for a better West Wisco Country Club. 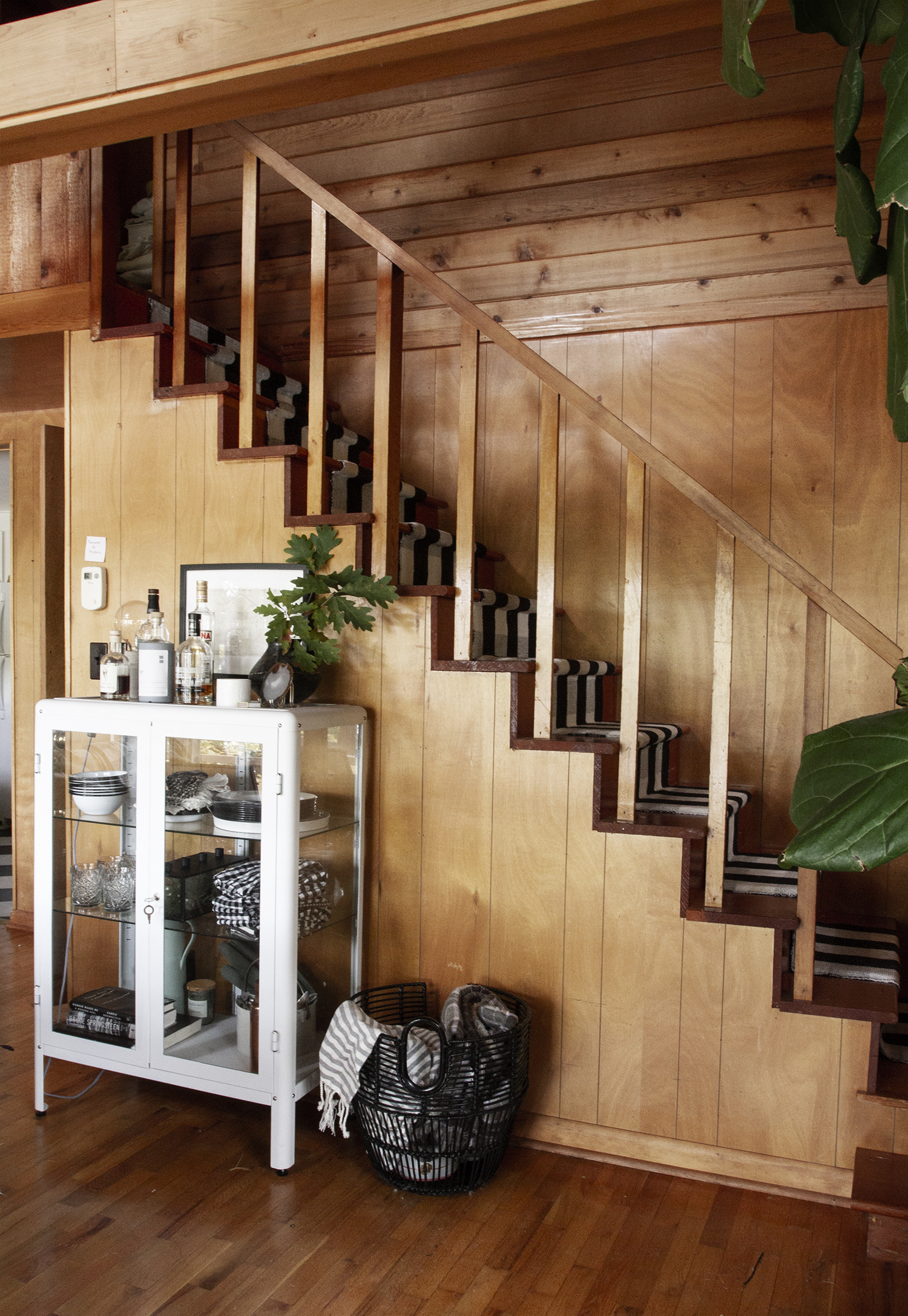