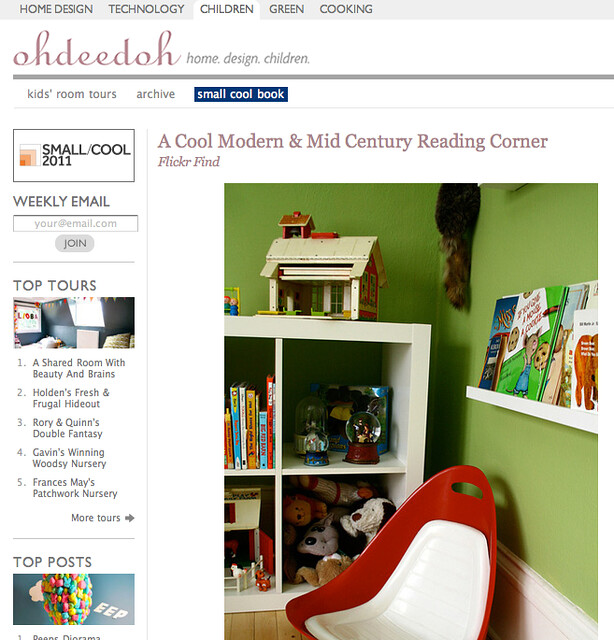 I was so excited on Monday when I noticed Finn’s room had been featured in an article on Ohdeedoh. I had just posted some photos on Flickr of his room a month-or-so ago after a cleaning day with the intentions of blogging it in the near future, and I guess with a push from Ohdeedoh, the future is now. So here is a quick tour around Finn’s big kid digs. 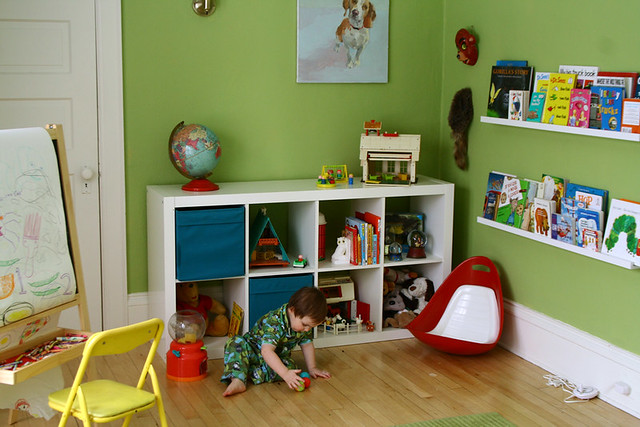 First off, Finn’s room is pretty large. It is obvious that when the house was built 100 years ago this room was made to be the home for two kids. The room is 100% symmetrical, there are two light fixtures on the ceiling with their own light switches, there are two closets (1 slightly larger) on either side of the room, and there are two built-in toy boxes inside those closets. So seriously, If this room ever needs to fit 2 kids, it can.

For now, I have split Finn’s room up into two different sides, a toy/book/activity side, and a sleeping/naptime side. Pictured above is the much more exciting of the two. Finn has a low Expedit bookshelf which houses all his favorite Fisher Price Little People, his collection of snow globes & music boxes, stuffed animals, toys, trains and a stash of sheets for forts. On the wall we have mounted two Ribba shelves from Ikea where Finn can have access to all his favorite books. He’s also got his art easel for coloring, and his oh-so-cool Tip-N-Rok chair for chillin’ (given to him by his Aunty Roonz), so the kid is set. 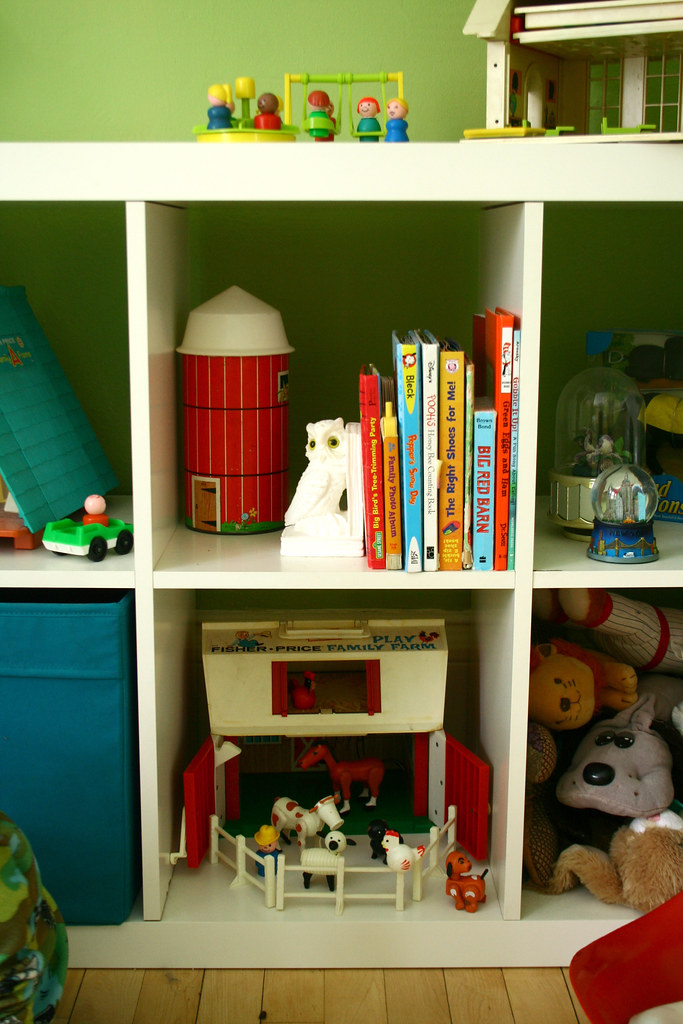 A close up of his collections.

I bought these Little People when Finn was a little person mostly for my own selfish reasons, but these have quickly become a favorite of Finn’s. He prefers them over almost all of his other toys. They have stood the test of time after 30+ years, I will vouch, I still love playing ’em too. And in case you were wondering, NO they are never this organized. 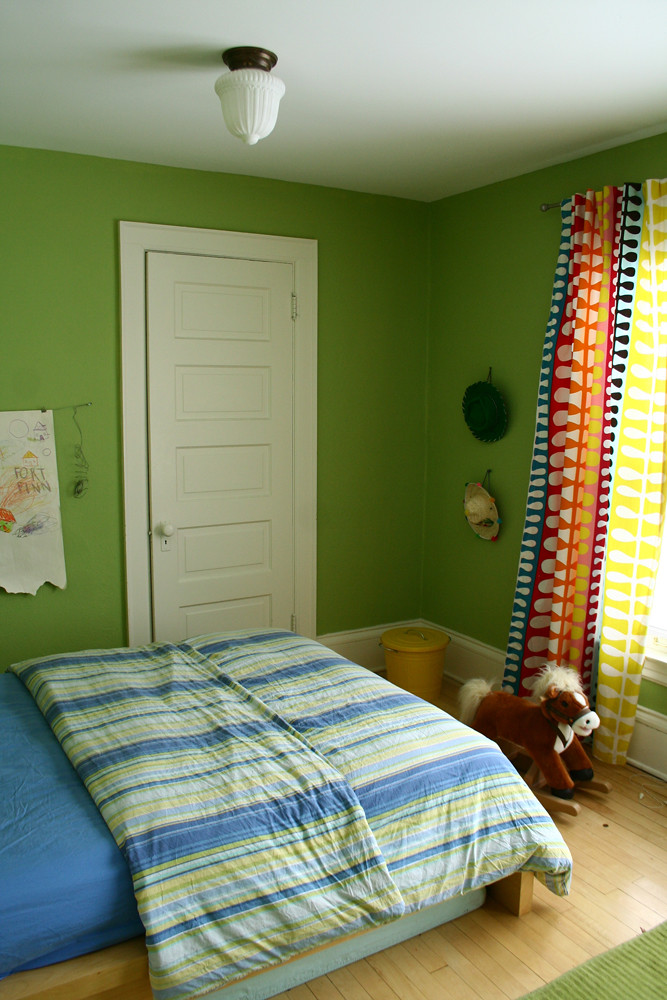 Here is the much more boring, sleeping side of Finn’s room. We were able to give him our old Malm bed from Ikea this winter when we upgraded to a much needed queen. It’s nice and low to the ground for him, so it’s easy for him to get in out, plus we were able to re-use some of our old duvets and sheet sets and meld them into a pretty convincing little boy look. 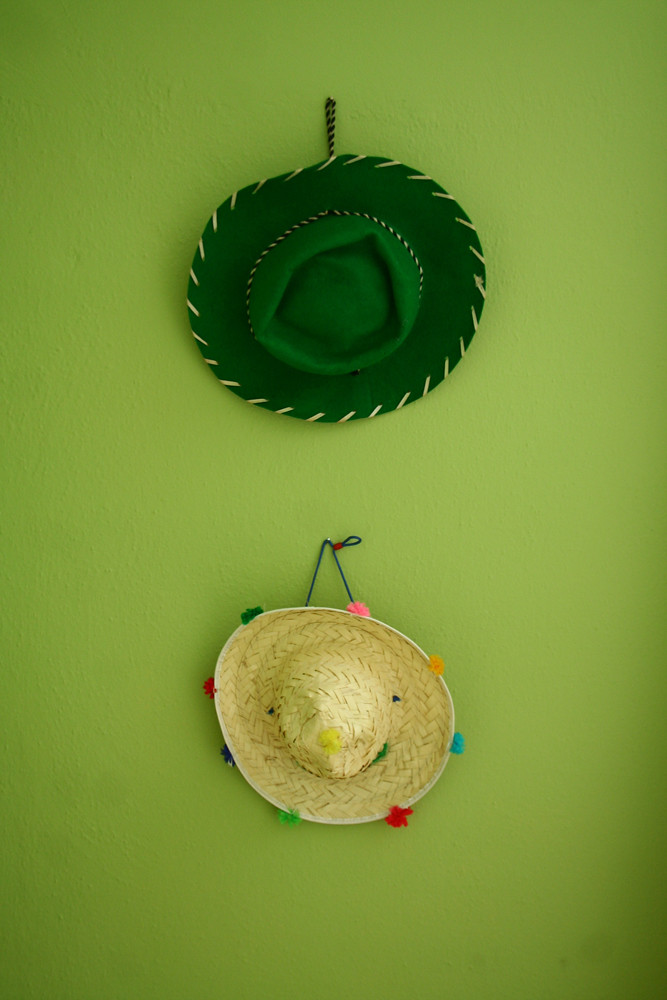 Finn has a pretty vibrant imagination, but he still hasn’t gotten around to dressing up. Just in case, I do have a stash of pretty cool hat’s for him if he ever decides to take it to the next level. For now, they make their home on his bedroom wall. 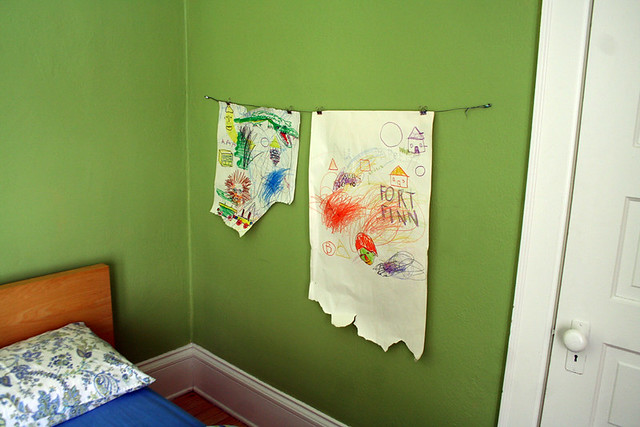 And lastly, I have recently added this art wall for displaying all his latest masterpieces. I just used a few nails and a piece of framing wire to hang his latest and greatest.

There are a few more detail shots on my flickr page, please check ’em out.

Share this...
6 comments
in Around the House, Kids’ Bedrooms, My House