Take Your Legs Off Yer Thing 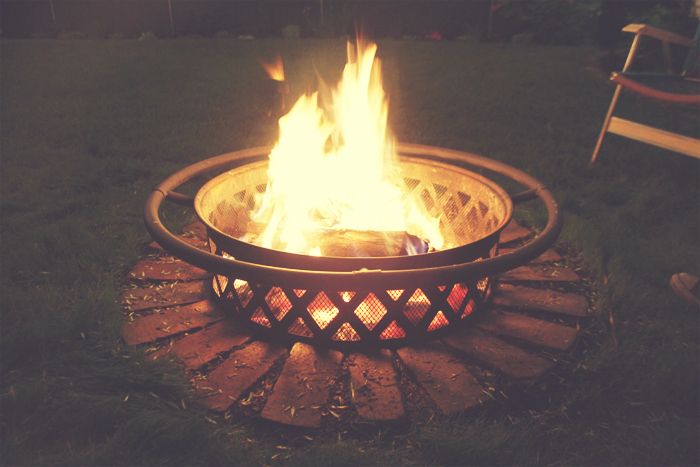 Something cool happened at Casa La Allen this weekend, we put our new, improved and revamped fire pit to use! The urban cabin vibes just got turned up to maximum volume!

Now we’re not newbies to fire pits, you guys, we’ve had plenty before. However, this new fire pit situation is much better than the others because we faux built it in to the yard. Get it? It looks built in but it still has the ability to be moved, cleaned up, washed up and from what I have read, is totally cool with city code. The trick? The new fire pit rests within a new brick hearth.

So why the semi-permanence? I was getting super sick of repairing brown grass spots every time we would have a fire in the backyard with our old portable pit. No matter how careful I was with the fire, the morning after would always reveal a new large brown spot on the lawn.

I was over my backyard looking so trashy; I have a special place in my heart for backyard college parties, but I don’t need to recreate that look in my own backyard. We were definitely not pulling off the urban cabin look that we’ve been striving for. Either we had to come up with a solution, or the fire pit needed to go.

Then it came to me (probably while drinking around the fire), why not remove the legs from our fire pit, and create a hearth for it using reclaimed bricks. Duh!, incorporating the fire pit into the landscaping of the backyard garden would make it look nice and tidy and welcoming and awesome. 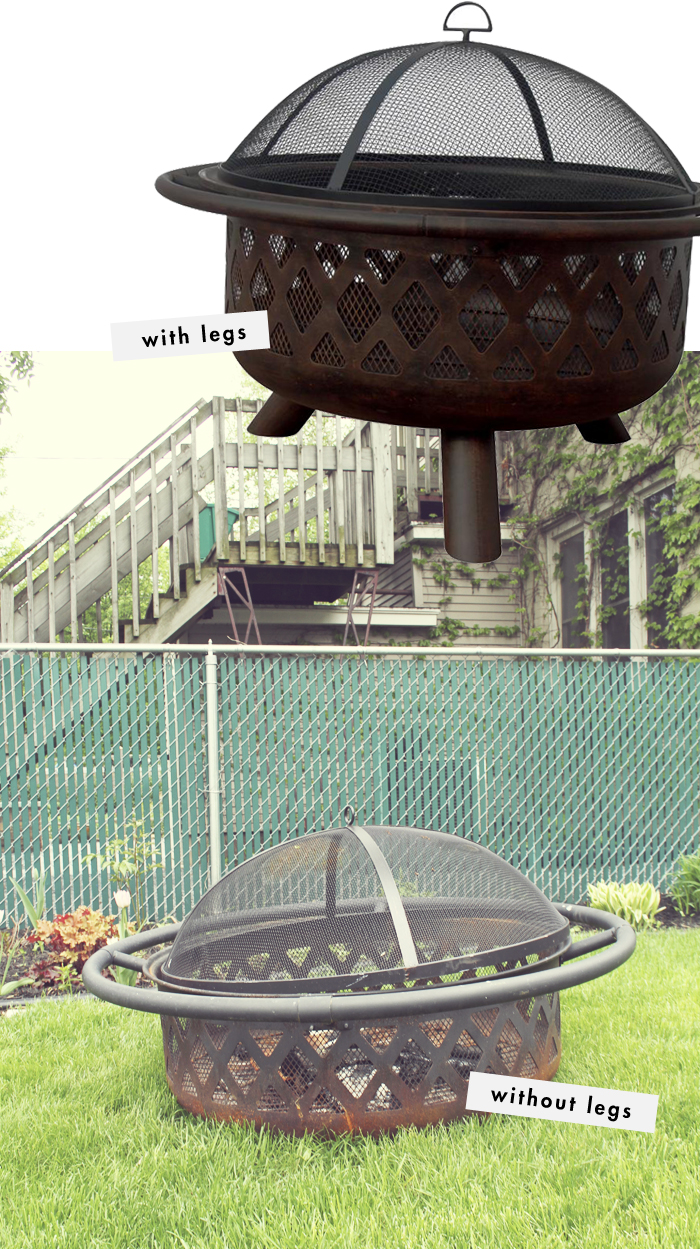 Last fall we splurged and purchased a fire pit from our local hardware store, and guess what?, It wasn’t the $29.99 advertised special (which is our usual go-to when it comes to buying fire pits). I was ready for a grown up fire pit that looked nice in our yard, it took a little negotiating, but Jeff finally opened his wallet and obliged. Our new fire pit was wider, larger and had a nice dome top. It also had a cool bar around the outside for resting your feet on it without melting your shoe soles. What an upgrade! Unfortunately, no matter how nice the upgrade, I still couldn’t get away from that morning after college party look whenever we used that pit. Ugh. 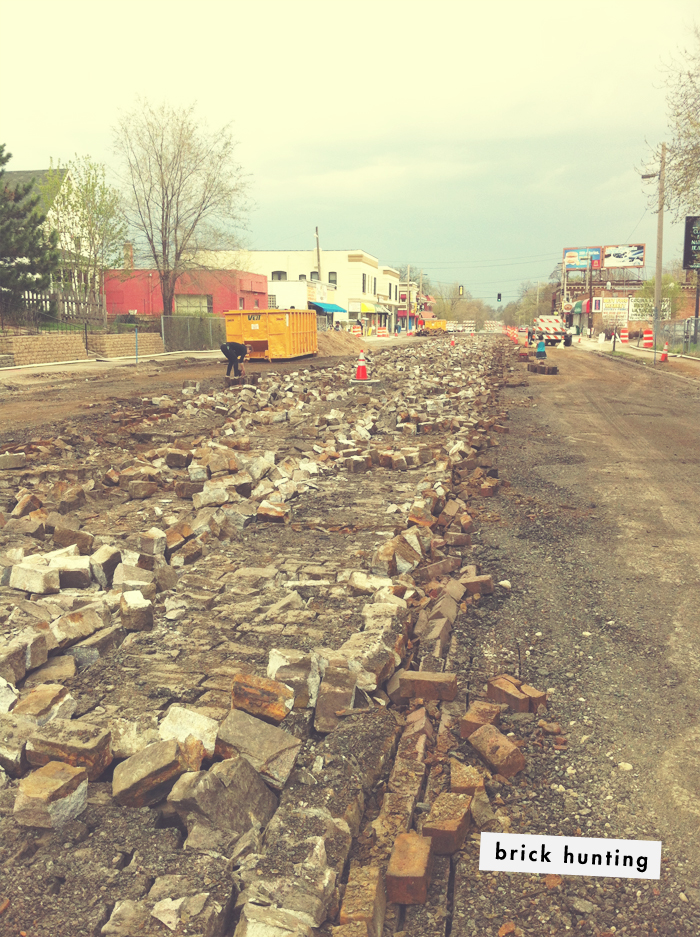 If you follow me on Instagram you might remember a few weeks ago when Gus and I went and grabbed some bricks from historic Nicollet Avenue. The street was being fixed, it was the most pot-holey street in all of Mpls. They had to tear up the avenue all the way down to the old street car tracks and 100 year old bricks before being repaved. It was a a brick-border-garden-lovers paradise. Look at all those bricks!

Gus and I were total badasses, we moved a few barriers and drove up on the street working quickly to load up the station wagon before the cops busted us, ha. We took 50 of these beautiful bricks home. We’ve used a few to make a path in our new boulevard garden, and the rest were reserved for the fire pit. 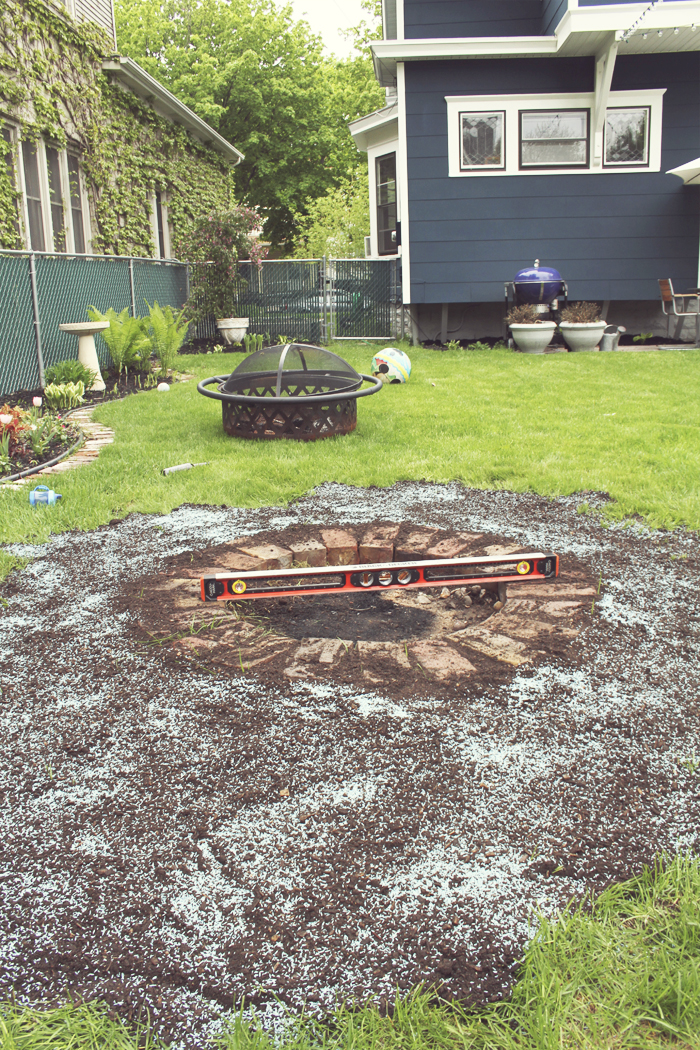 My plan was to remove the legs from the fire pit, dig out a shallow area for the pit to sit in, install a ring of bricks around the base of the pit, and then repair and grade the damaged lawn. It sounds simple and it was simple!

Once we had all our supplies together the execution took 45 minutes!

Taking off the legs was a bit of a challenge because we had used the fire pit. Out of the box it would have been no problem. On ours, the nuts and bolts were basically rusted together, we had to pry those legs off and it took a bit of muscle. Still, it didn’t take that long, it was just a bit scary making permanent changes to our fire pit. You can’t go back on torn off legs.

We placed the fire pit in the back corner of our yard, we choose this location for a few reasons, first it’s the furthest spot from our home, and our neighbors. Fires can get a little stinky and the volume of the fire pit party can get a little loud. You don’t want to bother your naybs too much, and you should probably invite them over once you do get your pit up and running. We also choose this spot because it’s nestled back in the corner of our garden, there’s nice greenery all around and you feel like you might actually be hanging out at a cabin.

This “fire pit spot” in our yard happened to be sunken in compared to the rest of the yard. It’s my guess that there used to be a tree in this spot, it since has been removed and thus a depression remains. I’ve been wanting to fill this area in with soil and regrade the lawn to make it level with the rest of the yard for a long time. For us, we barely had to dig out the 30″ circle that would house the fire pit because of the depression. If you don’t have a convenient depression in your cool level yard you better get your shovel ready. Since we didn’t have to dig we started by arranging the bricks around the pit. I did a test fire with the bricks in place, just to make sure the grass around the bricks wouldn’t turn brown after we had a fire. I also made sure that the bricks were level, most of them sat pretty squarely on the lawn but there were a few that I had to either dig out under, or fill in under with sand.

After we got everything positioned and leveled we filled in around the bricks with top soil. You could also use sand to fill in between the bricks but I was doing things quickly and didn’t have sand on hand. It’s been my experience that using soil in between bricks works just fine when all you are doing is creating a border. Since we had the depression in the yard we had to feather the top soil out into the lawn. In all, we used 10 bags of top soil. Using a garden rake, we graded and moved the soil so that it was level with the rest of the yard. Finn and I compressed the new soil by stomping on it, we wanted to make sure that it wouldn’t sink in and become depressed after a few good rains. We then added new soil to any spots that were not level. Lastly we added a good covering of new seed to the new soil making sure to feather the seed out into the existing lawn tossing the seed into surrounding grass as well as heavily on the top soil. 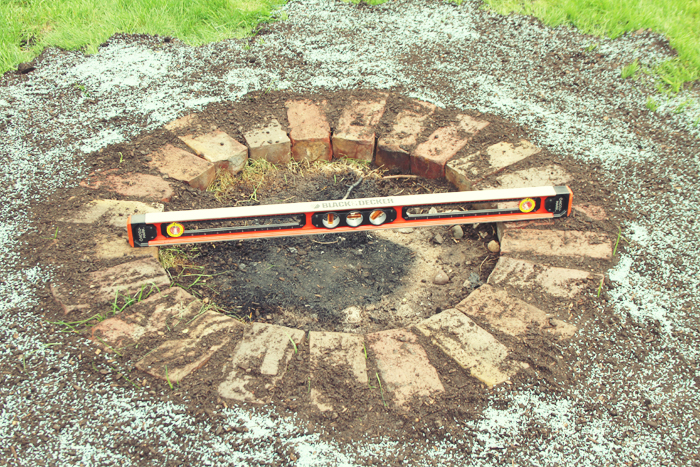 After the seed was laid we needed to protect it with what the internet tells me is called a “topdress”. You may have seen your neighbors use this around your hood, basically it’s a piece of lightweight material that allows the sun and rain to penetrate but keeps the birds away. We picked ours up at the hardware store. Not everyone has problems with grass seed and birds, but our neighbors house is covered in ivy and I’m pretty sure that is where all the birds in Minneapolis live. They will eat the grass seed in seconds, fer real. We had to cover that seed! The “topdress” is simple to lay down, just make sure to grab some stakes when you’re at the hardware store too.

We kept the grass seed covered for 3 weeks, when we removed the “topdress” it was long and lush! It’s filled in quite nicely and you can barely tell the difference between the new grass and the rest of the backyard lawn. I’m super happy with it.

I also have to mention, I think this pit is a great idea because even though it’s kinda permanent in the landscape of the yard it’s really not that permanent. My neighbor has a concrete fire pit in his yard, and basically it has the same effect as mine. If I want to take my pit out a few years down the road, all I have to do is remove the bricks, grab some top soil and seed away. In a few weeks my yard will be back to the way it was before. If my neighbor wants to get rid of his pit, he better hire some burly dudes to come sledgehammer that thing out of his yard. So really, this pit is not that big of a commitment. 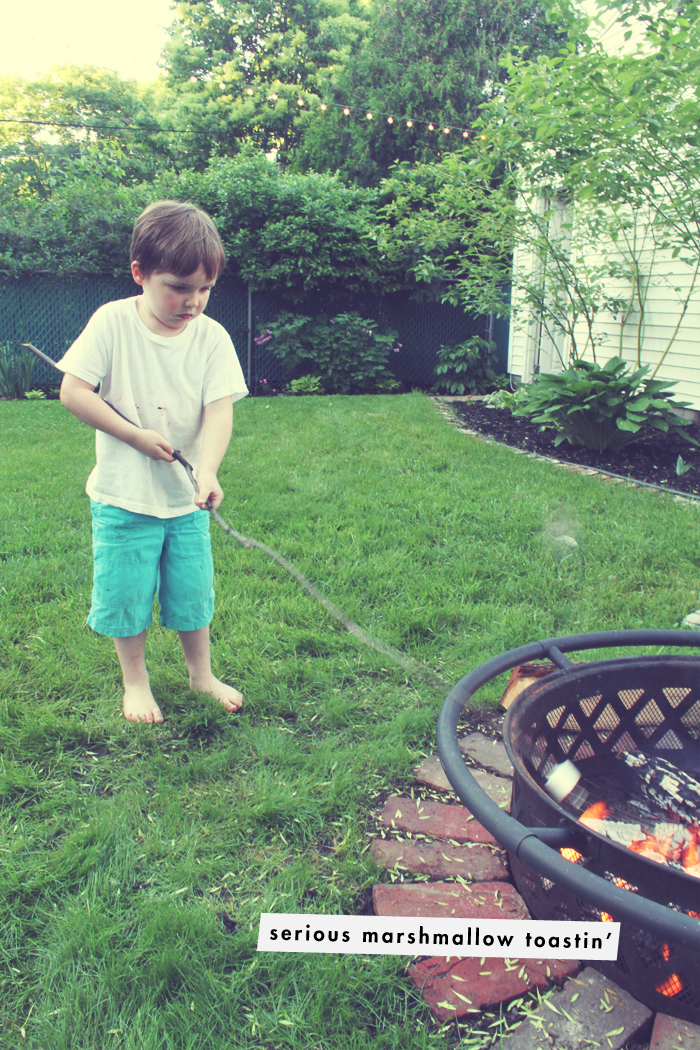 Here’s my guy Finn mastering the art of roasting a Marshmallow. This is seriously serious business. 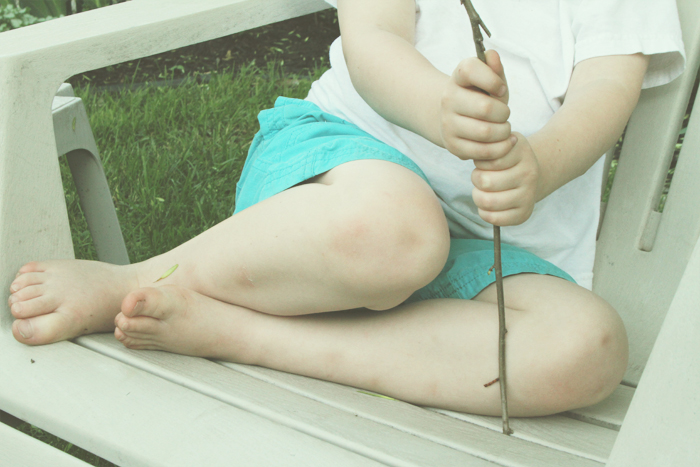